Many of you may know Uncle Jerry or may have seen him selling snow cones on Woolford Avenue in front of the Stella Marris Primary school, but how many of us know the real Uncle Jerry? 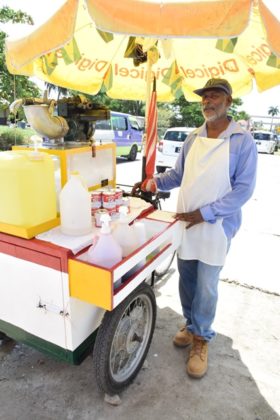 Fifty-nine-year-old Jerry Maselmony describes himself as a simple man from humble and challenging beginnings. He was born in Vergenoegen, West Coast Demerara in 1958. Nine years later his mother died leaving him and five siblings.   With no other parent, around to care for them, they were shifted from family member to family member and this pattern continued until Jerry came to Georgetown on his own.

Initially Jerry r had no interest in selling snow cones. A snow cone consists of finely crushed ice or shaved ice with various fruit flavoured sweet syrup. It is served in paper cups or plastic bags with a straw.

However, after leaving his job as a sales clerk with the BATA (Shoe Store) in 1987, he began selling snow cones for his livelihood immediately and has never looked back since.

“I didn’t have anything to do and I just fall into snow cones and I have been enjoying it until now. When I was a little boy my mom died, I lived with my grandmother, grandfather, uncle, aunty and that was rough. Couldn’t go to school, sometimes I had to go to school barefoot but times change now,” Uncle Jerry said.

Jerry considers his snow cone business a duty towards the school children, many of whom he has watched blossom and grown into successful adults. He takes pride in his job and ensures the children eat their lunch before they purchase the cones.

“I just try to do it the best way I can with them and get to know them.  It’s not only selling snow cones, I get to meet people and interact with them.  Everybody, all kinds of people. But the children, when they buy snow cone that means they get their lunch left back, so you gotta eat your lunch before you buy snow cone, some of them eat their lunch and some don’t so the parents tell me make sure they eat their lunch,” Uncle Jerry explained.

Married for almost 28 years with three children, his business though sometimes challenging has been instrumental to his family’s survival. Uncle Jerry’s only complaint is that business is slow when it rains, since the students hardly venture out of the school compound. Nevertheless, he is contented and is grateful that his business, has kept him earning a living all this while.

At the end of the day, Uncle Jerry loves his job and plans to continue serving the sweet snow cones to the children. 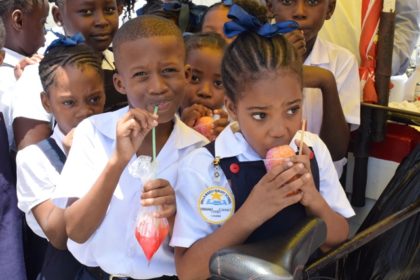 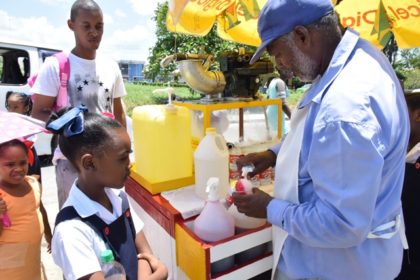 A little girl waits patiently for her snow cone as Uncle Jerry prepares it.