A number of senior citizens from Number Thirty Village to Naarstigheid on the West Coast of Berbice were on Tuesday, October 31, hosted by the Union – Naarstigheid Neighborhood Democratic Council, NDC, as part of their Month of the Elderly observances. 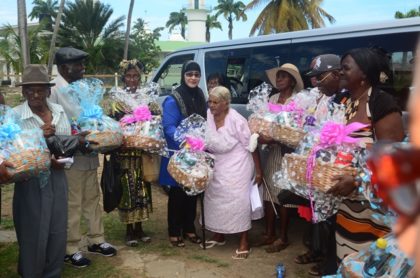 Senior citizens with their hampers.

According to Assistant Overseer, Renae Statia McAlman, the gesture, was not to merely acknowledge the elderly in the community, but also to show appreciation for their contributions to society in general. Over the past 23 years, the NDC, during the month of October, has paid homage to seniors through home visits and delivering hampers. This year however, the council sought to do things differently. Councillors were tasked with identifying seniors from within each village (in the NDC), with the aim of inviting them to a special luncheon in their honor.

Transportation was arranged, and the invitees were assembled at the NDC’s Bush Lot Office where they were entertained by councillors before being treated to a sumptuous lunch. Each guest was also presented with a hamper by Chairperson of the Union-Naarstigheid Neighborhood Democratic Council, Tiffany Mentore

The gathering included retired public servants, police officers, GUYSUCO employees, farmers, and even a former chairperson of the NDC.

One of the invitees Pastor David Paul, noted that “it felt good indeed, to be hosted by young people particularly, given that in our society there is a growing trend whereby there is less respect for the elderly, as compared with times gone by.”

Counsellor Rabindranauth Saywack, noted that the contributions made by the seniors would have not only impacted their communities but further afield as well. He stated that it was a pleasure to have hosted and served these seniors, particularly in light of the worrying trend of an increasing disregard for the elderly.

The guests for their part, thanked the NDC for the kind gesture. They expressed satisfaction with the work being done by the NDC in general, but did not hesitate in drawing attention to other areas which require the council’s attention. 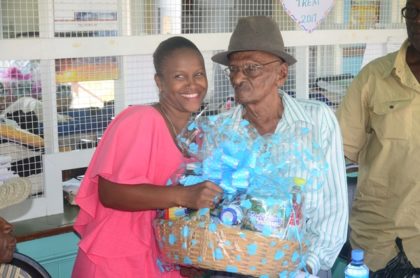 Chairperson of NDC, Tiffany Mentore presents a hamper to a senior citizen. 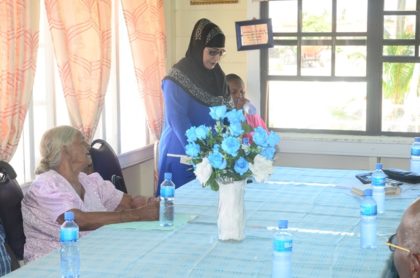