(MOTP) Georgetown, Guyana – (September 16, 2016) The Government of Guyana, today, inked a US$5M agreement with the German Government to support the implementation of the third phase of an on-going programme to develop protected areas in the country. The agreement was signed at the Ministry of the Presidency between Minister of State, Mr. Joseph Harmon and Regional Director of Germany’s Federal Foreign Office for Latin America and the Caribbean, Ambassador Dieter Lamle. 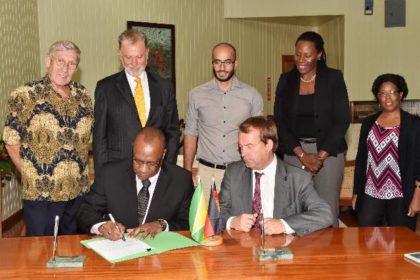 The signing took place immediately after a meeting between President David Granger and Ambassador Lamle, who was accompanied by Germany’s Ambassador to Guyana, Mr. Lutz Hermann Gorgens and Honorary Consul of Germany to Guyana, Mr. Ben Ter Welle.

President Granger said that Germany has a long tradition of supporting green development in Guyana and this bodes well for the ‘green’ trajectory that his Government has embarked on. “We appreciate your support and we realise the value of our forests in the suppression of the effects of climate change… Let me assure that your interest in climate change and your support for the green agenda is well placed,” the President told the Ambassador.

The President said that Guyana is part of the Guiana Shield, which is considered the lungs of the earth and that his Government is committed to preserving the integrity of that Shield. He noted, also, that the work that Germany has been doing in the field of biodiversity and in supporting Guyana’s environmental thrust, is essentially providing a global service.

The Head of State informed that Guyana has committed, at the 2015 United Nations Climate Change Conference (COP21), not only to extend existing protected areas, but also to the creation of new ones. He explained that each of the 10 Administrative Regions in Guyana has unique and rare 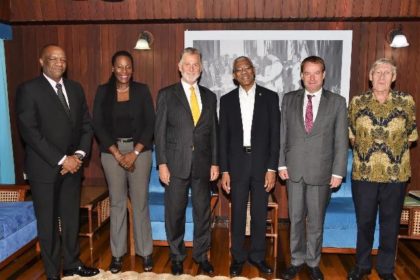 flora and fauna that must be preserved.

Meanwhile, Ambassador Lamle said that he is extremely happy to be part of the protected areas project and to be in Guyana at a time when the two countries (Guyana and Germany) are celebrating 50 years of diplomatic relations. He also commended the Government and people of Guyana for maintaining the forest in such a pristine state.

Mr. Ter Welle explained that the Guyana Protected Areas Systems (GPAS) Project commenced some 10 years ago and it is being implemented in phases. The first phase saw the disbursement of €3M, of which, a part was allocated to the Iwokrama International Centre for Rainforest Conservation and  Development for training and the remainder was spent on the setting-up of protected areas and the development of legislation. Phase II, the other hand, saw the disbursement of €4M, which went into the National Protected Areas Trust Fund, which was created through the passage of legislation and which that is managed by a board of trustees.

Of the US$5M that is made available in this third phase, US$4.2 will go towards investment in protected areas at Shell Beach, Kaieteur and the Kanuku Mountains. The remainder will be directed towards green initiatives as it is one of the priority areas of the Government.