Ambassador Cedric Joseph said Venezuela has to advance legal arguments to establish a case of nullity of the Arbitral Award of 1899.

“There is only one body that can deal with that, that is organised and established after 20 years of war and fighting and that is the ICJ [International Court of Justice],” Ambassador Joseph said speaking at a discussion on Guyana’s borders hosted by the University of Guyana (UG) on Thursday evening at the Theatre Guild. 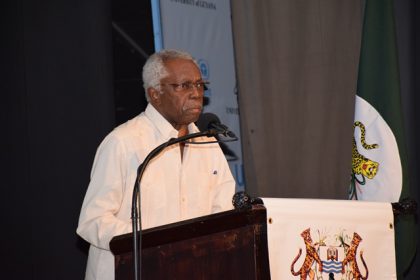 Ambassador Joseph was asked by the audience to weigh in on the recent decision by the United Nations (UN) Secretary-General (SG) to refer the settlement of the decades-old controversy between Guyana and Venezuela.

The Ambassador dismissed Venezuela’s recent criticism of the UN SG’s decision to have the ICJ resolve the controversy.

Venezuela, on Wednesday, insisted that only the 1966 Geneva Agreement can settle the controversy. However, Ambassador Joseph pointed out that the SG’s decision is in keeping with the Geneva Agreement.

The Ambassador noted that Guyana has exhausted all the provisions for settlement in the Geneva Agreement.  He also pointed out Guyana could still present its case to the ICJ without Venezuela citing the recent ruling by the ICJ in favour of the Philippines vs China over the south sea.

“Only recently, two years ago the Philippines brought a case of the South Sea China against the powerful People’s Republic of China, who did not participate and the court went ahead examined all the documents and issued a substantial judgement in support of the rights of Philippines,” Ambassador Joseph pointed out.

The controversy arose after Venezuela claimed that the Arbitral Award of 1899, which established the border it shares with Guyana, is null and void. The two countries, under the 1966 Geneva Agreement, turned to the UN Secretary-General to resolve what became a controversy under the Charter of the UN.

After years of attempts to resolve the controversy, including the use of the Good Offices Process, the UN Secretary-General, António Guterres, on Tuesday announced he is referring the matter to the ICJ.