Wakapau, Kabakaburi, St. Monica and Mainstay/Whyaka in the Pomeroon-Supenaam, Region Two received a total of $6Million in Presidential Grants to embark on green sustainable community projects.

The cheques were handed over by Minister of Indigenous Peoples’ Affairs, Sydney Allicock during a visit to Wakapau over the weekend. He was accompanied by Minister of Public Infrastructure, David Patterson.

Kabakaburi’s main economic activity is logging and according to the village’s Toshao, Sherman Lyte the monies will be used to construct a 40 feet ballyhoo boat. He thanked the government for its continued support to his community that has been witnessing steady progress over the past three years.

Toshao of St. Monica, Thomas Charles explained that the funds will be utilised to purchase three cassava mills to begin agro-processing production utilising the abundance of cassava grown in the village. The fogging machine that will be used to tackle the akishi ants that destroy farms in the area. Charles added that the equipment will be procured within a month.

Additionally, Charles shared that in 2018, the village was able to construct a community guest house using the received that year, while its satellite village Karawab, installed a solar system at its community centre.

Over at Mainstay/Whyaka, the village will be building its own Village Office with the funds received. Toshao Milton Fredericks explained that the council currently occupies the village’s multipurpose building and can now build its own headquarters to conduct business in a more conducive environment. 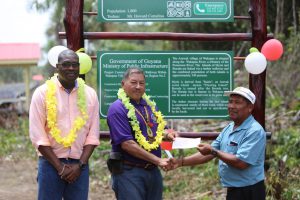 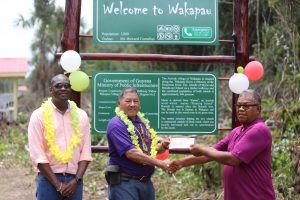 Toshao of Mainstay/Whyaka Milton Fredericks receiving a cheque from Minister of Indigenous Peoples’ Affairs, Sydney in the presence of Minister of Public Infrastructure, David Patterson 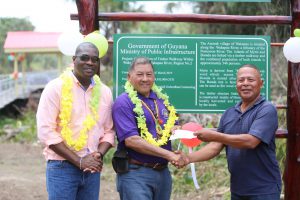 Toshao of Wakapau, Howard Cornelius receiving a cheque from Minister of Indigenous Peoples’ Affairs, Sydney in the presence of Minister of Public Infrastructure, David Patterson 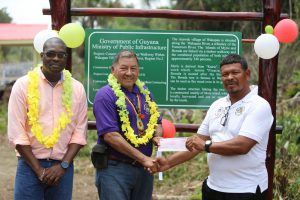 Toshao of Kabakaburi, Sherman Lyte receiving a cheque from Minister of Indigenous Peoples’ Affairs, Sydney in the presence of Minister of Public Infrastructure, David Patterson

Minister Allicock reminded that the annual Presidential Grants are awarded based on the community projects presented. He said that the Ministry is working to ensure that these monies are disbursed in a timely manner to enable the work of the Village Councils.

“This is not a campaign gimmick, this is the budget we are executing. these were requests made village councils and the funds are now being rolled out.  We will return as we have more to come.”

Minister Allicock encouraged the village councils to engage in more environmentally friendly projects that will create jobs for the residents while at the same time generating e income for the communities.

He also underscored the need to engage in agriculture activities. “This is an agriculture area… you need to start thinking of what you want to do as a village when these monies from oil production become available. You must not forget your agriculture …every day at least one meal is eaten, but who will provide that food if you forget about agriculture.”

Community tourism is another huge industry and according to Minister Allicock, the villages along the Pomeroon river can capitalise on it, since Guyana has been named the number one ecotourism destination in the world.

This is part of the government’s commitment to empowering the Indigenous peoples.