‘Wakenaam can teach the rest of the country a valuable lesson’

− island thriving, has potential to be self-sufficient

Wakenaam, located in the Essequibo Islands-West Demerara, has grown over the years despite being affected by challenges. This has been highlighted after recent visits were made by government ministers who conducted a walkabout the community to assess what has been done and what can be brought on stream soon. 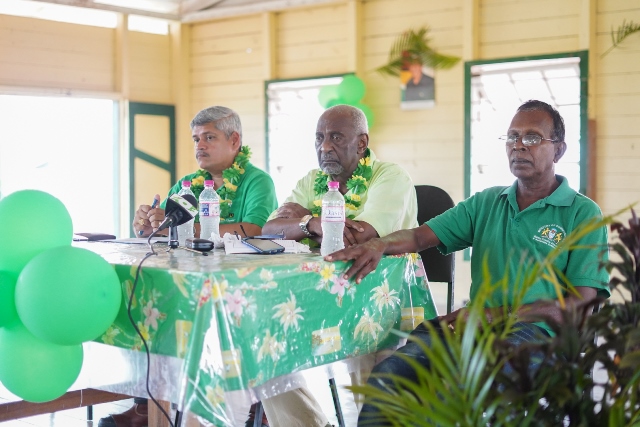 During a community meeting at the Sans Souci Primary School where they engaged residents, the ministers noted that residents on the island can teach the rest of Guyana a valuable lesson in terms of proved self-sufficiency and diversity by tapping into its internal potential.

Minister Sharma noted that Wakenaam had a sugar estate which was closed in 1986; however, this did not affect the community as persons took the opportunity to diversify in agriculture.

“I know that this island was once a sugar-producing island, with a factory that eventually was closed but the people diversified. They went into other crops, rice and cash crops, plantains, bananas, coconut, fruits and vegetables.”

To this end, Minister Sharma said that other villages can look at Wakenaam as an example.

“The answer is in Wakenaam, because Wakenaam survived the closure of the biggest sector in the community.”

Minister Scott pointed out that the island is one that embraces sport and the development of its human resource; demonstrated in the two renowned cricketers it has produced.

“Sarwan and Kemo Paul are from this Island… You can have a lot more Sarwans and Pauls coming from here. The government can support that by ensuring we develop playfields and promote sport events.”

It was acknowledged that provisions made, by the government to develop the infrastructural aspect of the village, has contributed significantly to the overall development of the community.

Among the infrastructural projects implemented this year on Wakenaam include the installation of streetlights, paving of asphaltic roads and strengthening of sea defence structure.

At the community meeting, residents took the opportunity to raise issues concerning water supply, noise nuisance among other small matters which ministers said can be addressed at the local level.