An all-around performance by Man of the Match, Rovman Powell of the Jamaica Tallawahs dampened the Guyana Amazon Warriors chance of finishing in the top two positions in the Caribbean Premier League. Powell’s brilliance in the field, with the ball and the bat, helped his team to the highest successful T20 chase in Guyana of 177 with the loss of just two wickets in 18.1 overs.

Powell scored an unbeaten 55 runs off 34 balls forming a 114 runs partnership with Ross Taylor who scored 61 runs from 41 balls. This was before his diligence in the field where he took three catches coupled with his two wickets for 21 runs.

“I am an all-rounder and I try to carry three aspects of my cricket to the Tallawahs team and to any team that I am playing for. So, it is hard work and dedication that has carried me so far” Powell stated. Despite picking up an easy victory, he said that there are still a few things that the team needs to work on if they are to have a chance of winning the title.

The Warriors, in their innings, got off to a fair start having lost the toss being put to bat. Losing their opening batsmen of Luke Ronchi and Cameron Delport by the end of eighth over, the Warriors were in a bit of tight spot with just 72 runs for the loss of two wickets at the end of the 10th over. 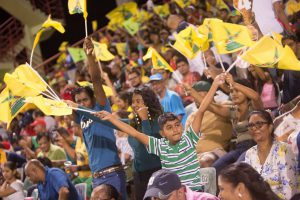 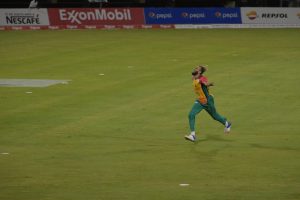 Pick of the bowlers for the Warriors, Imran Tahir celebrating one of his two wickets against the Tawallahs 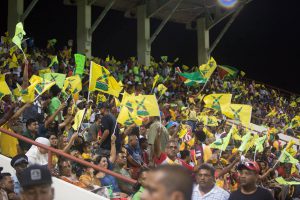 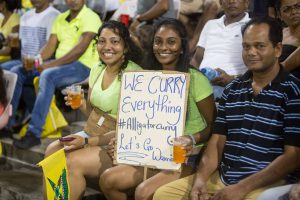 Nevertheless, it was Shimron Hetmyer and Jason Mohammed who led the attack against the Tallawahs finding the boundary often. Hetmyer was steady in his crease scoring gracefully alongside Mohammed who was creating havoc for the Tallawahs bowlers.

However, the pair’s 61 runs partnership was broken. This saw young Hetmyer missing out on a half-century by a mere 2 runs after losing his wicket scoring 48 runs off 41 balls. The Warriors continued to find the boundary led by Mohammed who top scored 54 runs from 33 balls accompanied by Chadwick Walton who made 25 runs from 16 balls. They would end their innings with 173 for the loss 6 wickets, which on almost any given night at Providence, would be deemed a defendable score.

Opening batsmen Glen Phillips and Johnson Charles of the Tallawahs came out firing, forming a 40 runs partnership. This alliance was broken by Imran Tahir who was the pick of the bowlers for the Warriors, getting the wicket of Philips in the fifth over.

Tahir would also take the wicket of Charles in his very next over. He was the only bowler from the Warriors’ team to pick up wickets, ending his spell two wickets for 30 runs from his four overs. The other bowlers just could not find their form and stop the onslaught carried out by the hands of Taylor and Powell.

Chris Green, who captained the Warriors in last night’s match, said that while the loss was a difficult one, credit must be given to the opposing batsmen. He stated “I thought we really put in a fantastic effort with the bat and then two very good players from the opposition got in and did a fantastic job. There is plenty of learning points for us moving forward with the ball and going into the playoffs next week.”

The Warriors face the Trinbago Knight Riders today where they must win and by a large margin to finish at least second on the table before heading into the playoffs. They now sit in the fourth position on the points table with 10 points behind the St. Kitts and Nevis Patriots on 11 points, the Tallawahs with 12 points and defending champions Trinbago Knight Riders with 14 points.