‘We are listening to you’ – DG Harmon to Martindale residents

Residents of Martindale in the Pomeroon River were on Sunday left satisfied after they were assured their issues would be addressed.

Minister of Business, Haimraj Rajkumar and Director-General (DG) of the Ministry of the Presidency, Joseph Harmon on Sunday travelled down the Pomeroon River where they met with residents of Martindale. The duo was part of a larger team consisting of ministers and government officials who travelled to the Pomeroon to engage residents in the riverine area.

The exercise is part of the Coalition Government’s continued efforts to fulfil their mandate to engage citizens at the grassroots level.

He stated that concerns of citizens in riverine and hinterland areas are important to the coalition emphasising since assuming office, the Coalition has invested heavily in the development of these communities, particularly in the area of education.

DG Harmon noted that with the implementation of the 5Bs initiative and the revamping of the education system, student performance across the region has improved.

Echoing of the Director-General, Minister Rajkumar told the residents that this engagement is another in a serious of community meetings the Coalition has embarked on to ensure the needs of Guyanese across the nation are addressed.

“We have visited several communities across the country and we have resolved a lot of issues. Today allows you to interact with senior government officials who can assist you,” he said.

The Business Minister also updated the residents on the Caribbean Court of Justice’s ruling on the December 21, 2018 vote and reiterated the Coalition Government’s commitment to upholding the ruling of the court.

He underscored that fact that the administration is operating legally but in an interim mode. Minister Rajkumar explained that this means that the government will continue to carry out certain functions as allowed under the Constitution and will administer the business of the people until elections are held.

Some of the issues raised during the meeting were the need for improved drainage, infrastructure and land. The Senior Government Officials assured that the issues will be passed on to the relevant ministers and will be addressed promptly.

During their visit, Minister Rajkumar and DG Harmon inspected the construction site for the new Neighbourhood Democratic Council’s (NDC) office. Building for the new headquarters commenced one month ago. The Nile-Cozier NDC was formed last year when Minister of Communities, Ronald Bulkan regularised the area.

At the end of the meeting, Minister Rajkumar and DG Harmon presented shoes, sports gear and agriculture material to the residents.

DG Harmon expressed hope that the items will be utilised for sustainable community development. 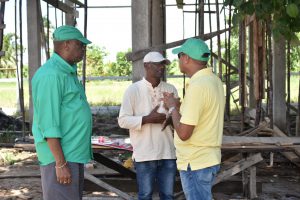 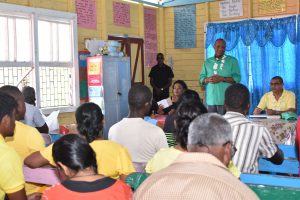 Section of the audience at the community meeting in Martindale 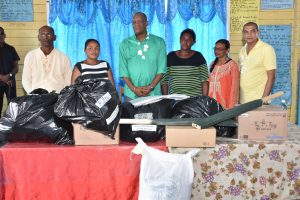 Minister of Business, Haimraj Rajkumar and with Director-General of the Ministry of the Presidency, Joseph Harmon along with residents of Martindale as they h and over the gifts