‘We can finish the job, give us the time’

─ “it would take more than 4 years to clean up 23 years of mess” – Public Service Min. tells Liang Avenue

─ Coalition Govt undoubtedly has the interest of the citizens at heart

Minister of Public Service, Hon. Tabitha Sarabo-Halley has urged residents of Laing Avenue and surrounding communities to commit to reelecting the APNU+AFC government to continue the work which it has begun. A meeting with the residents was held at the junction of Vlissengen and Laing Avenue on Thursday. 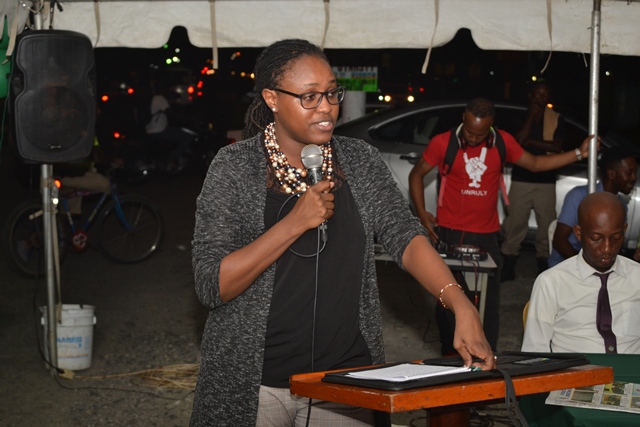 Minister of Public Service, Hon. Tabitha Sarabo-Halley delivering her remarks to the residents of Laing Avenue. 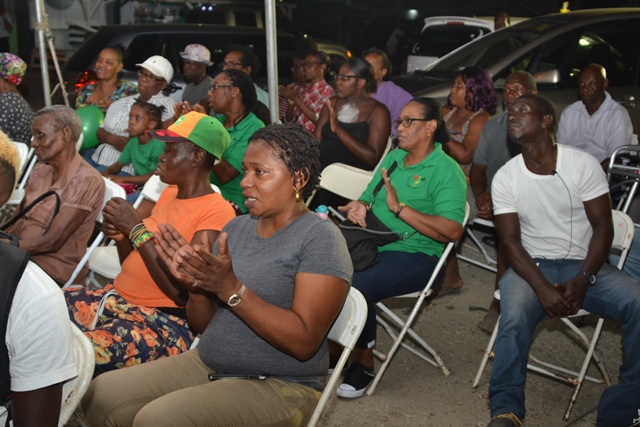 Some of the residents who attended the meeting.

The youthful minister reminded the well-attended meeting that the Coalition Government has done a significant amount of work since coming to office in 2015, and would like time to continue the transformation it has started.

“We have put a lot of things in order, but at the same time, we would recognise that it would take more than four years to clean up 23 years of mess. It would take some time, and we are in the process of doing so. What we are saying to you is that we need more time; we deserve more time because we have shown that with the time, we have received from you in May 2015, that we have delivered a lot.”

Also, the minister said that the current administration undoubtedly has the interest of the citizens at heart and will continue to work to provide a better life for all Guyanese. She urged those present to recognise the merits of the APNU+AFC in government.

Further, Minister Sarabo-Halley asserted that the vision of His Excellency, President David Granger, as well as the decisions being implemented by his ministers, will definitely lead to a better life for all. She stressed the importance of keeping the APNU+AFC in office after the General and Regional Elections of March 2, 2020.

“March 2020, I believe, will be the most historic election since 1953… It is my sincere belief that this election is the most important… We have had to govern over the last 50 years in an atmosphere where there were not enough resources to do everything that the society needed, and the citizens needed, but come 2020, there will be avenues for the resources needed to be utilised. We have to determine, as citizens of this country, who do we believe would do the best for the country and the citizens, with the resources once the oil money starts to flow… Sometimes, we look, and we wonder if other governments could have done better. If in four years, the government could have increased your salaries by 77% with the limited resources; imagine what this government would do with the resources once they become available.”

The minister was speaking as part of a community meeting held with residents of Laing Avenue and surrounding communities. The meeting, organised by Councillor Trichia Richards, also saw presentations by veteran politician Aubrey Norton, His Worship the Mayor of Georgetown, Pandit Ubraj Narine and Councillor Eketa Edwards.