With the Flag Raising ceremony to observe Guyana’s 50th Republic anniversary mere hours away, participants are perfecting their roles for this momentous milestone.

After three weeks of practising, the last rehearsal for the Flag Raising Ceremony on Saturday, February 22 was held on Friday. Hundreds of participants gathered with their respective leaders to partake in the exercise. 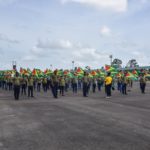 Some of the participants from Sophia YEFC do a run through of their bit. 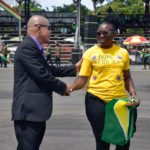 Minister of Social Cohesion, Hon. George Norton speaking with one of the coordinators of the 50th flag raising ceremony. 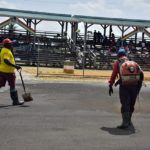 Some workers completing preparatory works for the celebrations at D’ Urban Park.

Minister of Social Cohesion, Hon. Dr. George Norton told DPI the administration is versed in preparing for occasions such as these, therefore, he is confident that all will go well.

The Minister said he is, however, a believer in adage ‘practice makes perfect’. “I am of the school of thought that believes rehearsals are never enough. I would have loved to have more rehearsal time but I am optimistic.”

He said his concerns are more in line with favourable weather. “I’m more concerned about the weather conditions. And even though we have a Plan B, I am hoping for the best weather.”

On Saturday 22, D’ Urban Park will be the venue for the grand flag raising ceremony then on Sunday, February 23, all roads once again lead to the site as floats and revellers with colourful and eye-catching costumes converge for Mashramani Day celebrations.