The West Coast Road Improvement Project continues as the final layer of asphalt concrete has been laid at Dem Amstel.

Speaking with the Department of Public Information (DPI), Projects Coordinator, Ministry of Public Infrastructure, Kester Hinds explained that one half of the road from Windsor Forest to Vreed-en Hoop has the final layer of asphalt concrete while works on the other half have already begun. 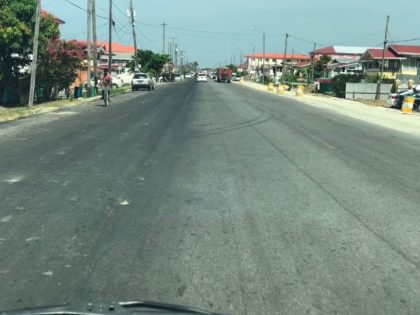 Half of this road along Windsor Forest has been laid with the final gradation of asphalt concrete.

“We’re working in different locations; we’ve completed Dem Amstel and we’re on schedule to complete the works on time. Paving is ongoing and should be completed by December and outstanding works are the installation of road signs and marking, highway lighting road and completion of the Groenveldt Bridge in Leonora,” Hinds underlined.

The US$46M project which began in January 2015, initially had a 2017 deadline but was delayed due to rainfall and removal of utilities. According to Hinds, all the works will be completed by the new March 2018 deadline.

The project caters for the improvement of about 30.7 kilometres of the West Coast Demerara road from Vreed-en-Hoop to Hydronie, bridge replacement and repair, drainage and road safety works, pavement markings and safety barriers along severe curves.  To date, works are 78 percent completed and efforts are intensifying in several areas along the West Coast for timely completion of the project, Hinds emphasised. 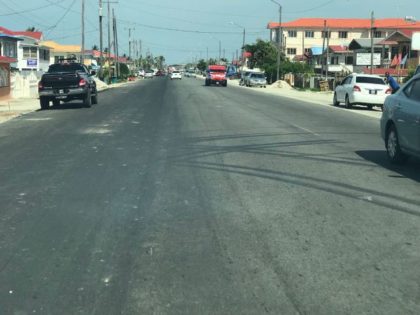 Similarly this road along Vreed-en Hoop has the final layer of asphalt concrete.