Work will continue in 2017 to create a national identity system

The Department of Citizenship will continue its work to improve visa, passport and other registration services while work continues on the development of a national identity system.

Speaking in support of the $250Billion, 2017 National Budget in the National Assembly on Wednesday, Minister of Citizenship Winston Felix highlighted several initiatives allocated for his Department in the budget. 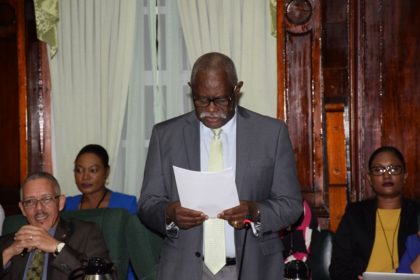 The creation of the national identity system seeks to equip citizens with one unique identification number, Minister Felix explained. “The same ID number you have at birth would be the one at the time of registration. The same number proceeds to your driver’s licence, your tin number, and your bank accounts. This is useful to prevent fraud,” Minister Felix explained.

The national identification system stems from pronouncements by the President, in October, on the proposed amendment of the National Registration Bill to include biometrics of citizens to be recorded on their national registration cards.

The creation of this database will follow upon the completion of the digitisation of the General Register’s Office (GRO). Minister Felix said that a project has commenced to build a database of records from 1987 to the current period while the procurement process has begun to digitise records from 1896 and 1986.

“When both projects are completed, we would be prepared to print our birth certificates and achieve faster searches for birth records (and) reduction of the time it takes to produce a birth certificate,” Minister Felix said.

The government has been working with UNICEF to ensure all children are registered at birth to achieve 100 percent birth registration. “Our children are our future and we must protect them,” Minister Felix said.

Through the collaboration, the government has recorded 491 late registrations. There have been outreaches in outlying regions with the exception of Regions Three and Four Minister Felix said. “There are more unregistered births which will be pursued in the new year,” Minister Felix added.

Efforts will continue in 2017 to improve the passport services by decentralisation. The Georgetown Immigration office which currently is the sole processer of passports has processed 105,068 passports while 14,456 were prepared for the diaspora, Minister Felix said.

Budget 2017 has made allocation for the construction of passport offices in Linden and New Amsterdam. Minister Felix explained that Mabaruma and Bartica are under consideration for offices while there is the possibility for Regions Eight and Nine to facilitate mobile service. “By decentralisation we are seeking to improve the system (and) deliver higher quality service to our citizens,” Minister Felix told the National Assembly.

There are also provisions for the setting up of online applications for visas to enter Guyana. “In addition this government is exploring with IOM, the employment of online visas to reduce or prevent the possibility of fraud,” Minister Felix said.  In 2016, visas of various categories were issued to 1,163 nationals from 76 countries.

Additionally, the government will work towards following through on recommendations from the Disciplined Forces Commission’s 2004 report to contract civilians to perform police functions that do not require police training. To realise this, the government will table the Immigration (Amendment) Bill in 2017 to delink the immigration department from the Guyana Police Force.