The Working People’s Alliance (WPA) earlier today said it is in full support of house-to-house registration before the next elections are held.

Speaking through its Chairperson Tabitha Sarabo-Halley, the long-standing political party said the Guyana Elections Commission has a responsibility to produce elections which are free and fair and free from fear.

“GECOM as an independent agency should have the ability to determine whether or not it is an imminent exercise; if it is an exercise that is necessary and should happen before we have the elections,” Sarabo-Halley said.

She added “Based on the discussions that are happening with the commissioners at GECOM they recognise that it should happen even though the PPP commissioners are of the view that – ‘we can go to elections whoever is on or off it doesn’t matter’ – as far as they are concerned. But we believe that disenfranchisement should never be our goal as a country or GECOM’s goal. So, if it is, we are not dealing with disenfranchising people then house-to-house registration is a must,” the party’s chairperson said.

Sarabo-Halley also underscored the importance of house-to-house registration in not only removing dead and absent registrants from the Official List of Electors (OLE) but ensuring that every eligible citizen gets the opportunity to be placed on the OLE.

“We at the WPA are in agreement with the demands for house-to-house registration to be done before elections. It is a right of the young people who would have just turned 18 and eligible to vote to get on that list. Every person who is eligible to vote; they need to have that option. Whether or not they choose to vote is also their right, but they have a right to be on that list so that they can make a choice once elections come. There is the other aspect of it, of getting persons who are not supposed to be on the list off that list, and house-to-house registration will also deal with that.” Sarabo-Halley said.

The party’s position comes in the light of the Guyana Elections Commission releasing information yesterday indicating that the earliest it can deliver elections in keeping with the demands for elections, following the December 21 No Confidence Vote and the Chief Justice’s ruling, is July.

The timeline suggested by Chief Elections Officer, Keith Lowenfield does not cater for house-to-house registration, a position contrary to that of Commissioners Vincent Alexander, Desmond Trotman and Charles Corbin.

At yesterday’s media briefing PRO of the elections management body, Yolanda Ward said, “the National Register of Registrants has a total of 663,365 persons whereas the Official List of Electors (OLE) has 633,155, figures which support the argument that the OLE is heavily bloated and needs to be sanitised to protect the integrity of any elections held with it.

While more than $3Billion has been allocated to GECOM through the 2019 budget, Deputy Chief Elections Officer (DCEO) Roxanne Myers said the process will require nine months to be completed. 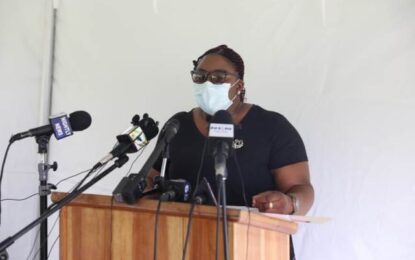 Author Details Isaiah Braithwaite Author email isaiah.braithwaite@dpi.gov.gy DPI, Guyana, Monday, June 1, 2020 The Guyana Elections Commission (GECOM) today disclosed that of 207 names submitted for verification of persons having voted but being out of the jurisdiction, 172 were found to be out of... END_OF_DOCUMENT_TOKEN_TO_BE_REPLACED