The villages of Yarakita and Sebai, Region One, is the latest recipient of a tractor and trailer each. The communities also received equipment (tools) to assist in their agriculture drive. 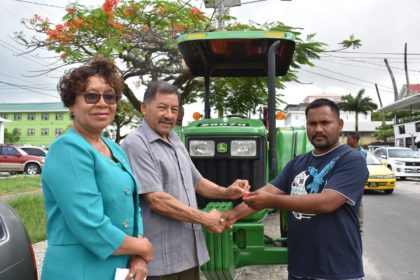 Minister of Indigenous Peoples’ Affairs Sydney Allicock handing over the keys of the tractor and trailer to Toshao of Yarakita, Nazim Haniff

Toshaos of Yarakita, Nazim Haniff and Sebai, Vincent Emanuel, today, received the keys to the tractors from Minister of Indigenous Peoples’ Affairs Sydney Allicock at the ministry’s Quamina Street office.

The vehicles are funded by government, through the Ministry of Indigenous Peoples’ Affairs capital project. The tractor and trailer each cost over $7M.

Both communities are predominantly involved in farming and logging. Minister Allicock said Agriculture and logging  are among the main drivers of economic growth, and as such, he anticipates that with the acquisition of this valuable piece of equipment, the village can make further contributions to the sectors.

Toshao Haniff said that the Village Council will ensure that the equipment will be fully utilised, since there is an urgent need for such equipment. The tractor will be used to transport lumber and agriculture produce to meet the 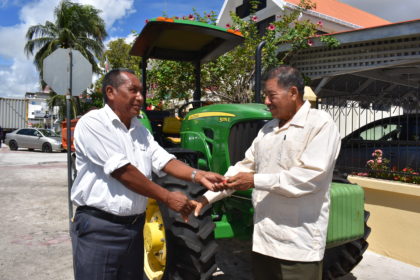 Yarakita has a population of close to 800 residents. Its closest neighbour is Whitewater which is located approximately one- hour drive through the trail.

Meanwhile, on May 30, Masakenari, Region Nine received a truck, which was acquired under the Community Development Plan (CDP). The truck will provide a trucking service in Deep South, Rupununi. The Kanashen Trucking Service will be located in Parabara since Masakenari is only accessible by boat and air.