“Young Leaders; Go Forth with Purpose”

– Graduates of Governments Youth Leadership Training Programme charged to used their training to make a difference in their respective communities.

On the ground training is the best way of developing one’s leadership skills. According to Melissa Carmichael- Haynes, Director of Youth at the Ministry of the Presidency, leadership is hard work, and young people must get to know themselves better before stepping into the position.

The Youth Director made the statement during Sunday’s graduation ceremony of 60 young adults from various regions across Guyana. The youths took part in Module 2 of Government’s Youth Leadership Training Programme, which was held at the Madewini Training Centre. 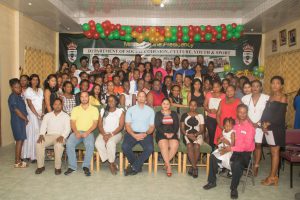 Carmichael-Haynes underscored that it was important for the graduates to first believe in themselves.

“Young people, you have to understand that when you step out to lead, know who you are, have a purpose, be purpose driven,” Carmichael-Haynes said.

The training programme was organised for two weekends for persons between the ages of 14 to 35 years old. To complete the course, participants would have to make 20 contact hours.

During his overview of the programme, Ronald Austin Jr., Senior Education and Training Officer at the Ministry of the Presidency, said key aspects of the programme included, among others; parliamentary procedures via a mock youth parliament debate and a special lecture on Government’s Green Initiative.

The charge to the graduates was given by the Chief Executive Officer of GO-Invest, Owen Verwey, who urged the young leaders to understand their new position. “You are the future caretakers of our society,” He said.

Verwey told the young graduates to determine their skill set early and to focus on the end objective, as along the way, there would be many distractions.

So far, more than 600 persons have been trained as young leaders since the programme began in 2015.