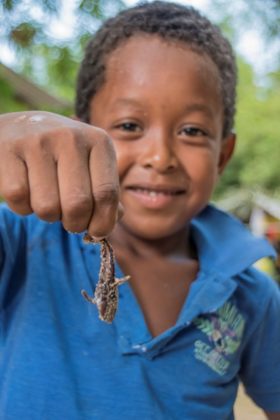 This little boy holds up his bait.

Families arrived at the event in big chartered buses, ATVs, bikes and all models of cars, braving the rough terrain on Sunday, October 29. Others arrived the day before and camped out at the area called the landing, whilst some slept in their cars. There was a huge bonfire on Saturday and music from local sound systems. Vendors slept on location and those participating in the fishing competition set out in their boats as early as 6:00hrs on Sunday.

It was fun, family and relaxation with the Purai family all the way from Enterprise on the East Coast of Demerara, making the first catch of a hefty Piranha or as it is known in Guyana, Pirai Fish.

When the Department of Public Information (DPI) spoke with Nirpaul Purai, he was thrilled at his family’s accomplishment, of having made the catch just three minutes after the hook went into the water. He said a chicken head was used as the bait. It was the family’s first time at the event and they seemed to have enjoyed every moment.

Several booths made of bamboo, harvested from within the village, were set up since Saturday. Some sold art and craft and stuffed animals. The food stalls, however, attracted the most attention, with hot off the stove meals of fish and chips, cook-up, curry and various fish based dishes.

Some even made excellent sales on beverages, but then there were others like, Anil Shudin from Grove on the East Bank of Demerara, who fired up a grill to ensure his family got a tasty meal.

Vending Manager, Compton Sampson told DPI that the Rockstone Fish Festival committee intends to promote the event from very early next year, to attract a larger turnout, especially from the diaspora. “We’re trying to get more people involved, especially the youths in the community…more boating activities, but for me, the fish festival is a good thing… if you look around we see people of all races”, he said. 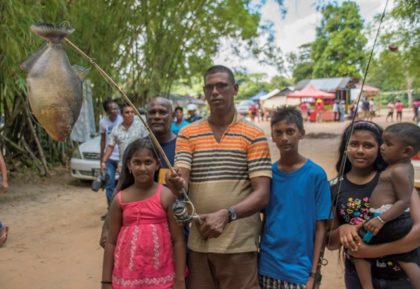 The Purai family makes the first catch of a pirai fish.

Region Ten Councillor, Devin Sears, said plans are on stream to make the annual festival one to be revered not only locally but regionally and internationally as well. He stated, “We want to not only focus on Rockstone Fish Festival, which is an annual event, but every month you could look forward to some activity happening here because there’s limited income. When it comes to Rockstone, persons focus on lumber, gold and so on, but eco-tourism is an opportunity to develop the community and so on.”

Sears stressed the need for more accommodation, noting that plans are in the pipeline to build more log cabins and incorporate more tours. He sees this as the perfect opportunity to build social cohesion, since persons from all ethnicities and backgrounds converge there annually. The councillor is urging more businesspersons to come on board and take advantage of the opportunities, which can lead to economic development.

Meanwhile, Region Ten Member of Parliament (MP), Audwin Rutherford noted the festival should be more than an annual event. He said, “We must understand to promote Rockstone as an area for fishing…therefore we must aggressively address the roads…the road is a challenge.” At the Parliamentary level, MP Rutherford said he will be pushing for development of the community which has endless tourism opportunities.

Persons also received prizes for their participation in the various activities. 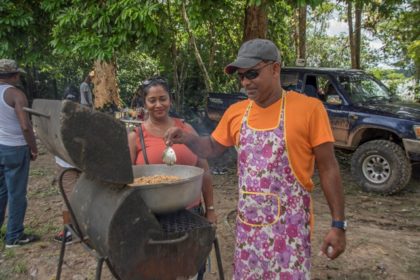 Anil Shudin fires up the grill. 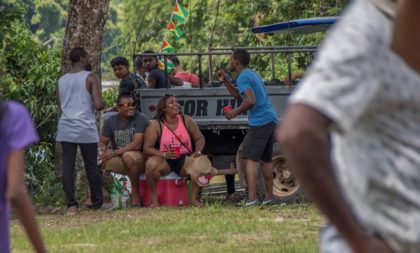 Family, fun and relaxation at the Rockstone Fish Festival.