Soca fever filled the Linden/Georgetown Municipal Bus Park on Saturday evening as nineteen contestants battled for a place in the 592 Soca Monarch finals. At the end of the night, fifteen stood triumphant.

With her high energy performance of her song ‘Calling meh’, Lisa ‘Lisa Banton’ John set the stage for what was to follow. Next up was Rudolph ‘Sweet Kendingo’ Kendall and his tune ‘One Day’ took the temperature up. 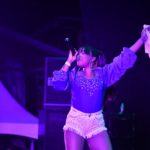 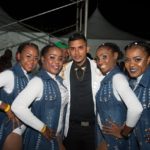 (flashback) Stephen Ramphal and his back-up dancers at the 2019 Soca Monarch semifinals in Linden. 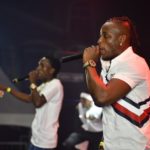 The backup band ‘Heatwave’ warming up the audience. 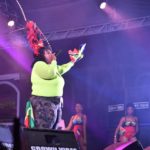 A section of the audience at the 2020 Soca Monarch semi-finals in Linden.

Lindeners’ excitement nearly reached fever pitch when hometown bit and last year’s runner up Steven Ramphal took to the stage to spread his message of love and unity.

As expected, the event’s regular hype man, MC Malcolm “Wickedy” Perriera kept the crowd engaged with his inimitable humour.  A high point of the evening came when he invited 2020 Junior Soca Monarch Relon Sumner on stage to perform his piece. So good was Sumner’s act that many in the audience were left amazed when Perriera disclosed that he was visually impaired.