Capoey Primary School has marked a noted difference in student attendance following the implementation of the Hot Meals Programme. The school’s cook, Mary Williams, disclosed this during an interview with the Department of Public Information (DPI).

“Since the government introduced the hot meals programme, more and more of our young people are attending school. You know, at one time many of our youths would not attend school not because they were not interested in learning, but they had nothing to eat and this programme fix that completely. Now, we have 100% school attendance,” Williams explained.

Some of the students of Capoey Primary School waiting to greet Minister of Social Cohesion, Hon. Dr. George Norton.

Minister of Social Cohesion, Hon. Dr. George Norton chatting with some of the students of Capoey Primary School who greeted him during his visit to the community.

The hot meals programme is one component of the 5Bs initiative implemented by the Coalition Government to ensure students across the country have access to quality education. The programme comprises the provision of transportation via buses, boats and bicycles, along with books and breakfast – all free of cost.

“For the first time, our school was able to produce good results at the National Grade Six Assessment (NGSA) exam. About six or seven of our young people are attending schools on the mainland, and while the teachers played an important role in helping them academically the introduction of the hot meal programme made a huge difference,” the school cook explained.

According to Williams, teachers and other staff members also benefit from the initiative. She explained that the dishes are prepared with fresh ingredients grown right in the community. A move, she noted, towards the consumption of healthier meals.

Her sentiments were backed by Toshao Ralph Hendricks who requested a new stove, pots and other utensils from the Minister of Social Cohesion, Hon. Dr. George Norton, as

The minister was at the time conducting a walkabout the community of Capoey. He promised to forward the request to the Education Minister, Hon. Nicolette Henry and also committed to having his department.

“This initiative is part of His Excellency, President David Granger’s 5B programme which is very close to his heart… Education is a key focus for this government and to hear that there have significant changes within this school system, I must provide the necessary assistance to ensure that this continues,” he said.

Earlier this year, the Food for the Poor Guyana Incorporated established feeding centres in ten primary schools located in Region Two. This move is aimed at boosting the government’s school feeding programme.

The primary schools that benefitted included Lima Sands, Capoey Lake, Bethany, Better Hope, 8th of May, Hampton Court, Fisher, Queenstown and St John’s in the Pomeroon River. The kitchenettes constructed at the various locations measure 16×14 in length and are furnished with sinks, cupboards and an area for the preparation of meals.

Located near the villages of Alliance and Taymouth Manor on the Essequibo Coast in Region Two, Capoey can be accessed through Anna Regina, Suddie, and the community of Charity. 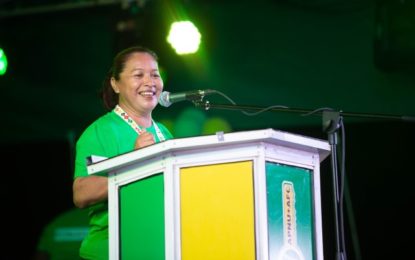 Women’s empowerment – a key feature of the APNU+AFC

Author Details Delicia Haynes Author email delicia.haynes@dpi.gov.gy DPI, Guyana, Thursday, February 27, 2020 Guyanese women are more empowered and over the last four years under the Coalition administration more of them have assumed leadership positions, while others have been recognised for their... END_OF_DOCUMENT_TOKEN_TO_BE_REPLACED

An Evening of Reflection and Thanksgiving:...