A university education will set you apart – Prof. Mohamed

─ pay attention to your GPA

─ take part in every aspect of university life

Students entering the University of Guyana (UG) for the first time have been welcomed into the academic institution and urged to take part in every aspect of university life.

While delivering the feature address at the official welcome ceremony for the academic year 2019/2020, at the George Walcott Lecture Theatre, Deputy Vice-Chancellor Philanthropy, Professor Paloma Mohamed, cautioned students to understand the importance of their Grade Point Average (GPA), as this is what will sets them apart and give them more opportunities in the future. 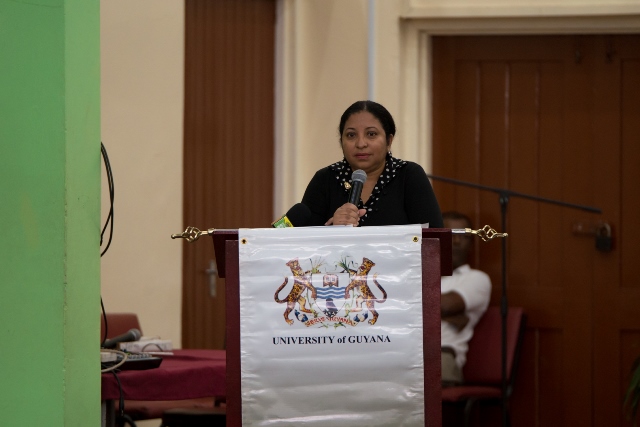 Orientation of first year students at the University of Guyana (UG).

She noted that while education is very important, in many instances, even university students do not give enough thought to their future. “Everybody is going to get a first degree eventually, so if you really want to keep climbing, if you want to be distinguished, you need to think about how else you are going to move forward, and the GPA is really important to that,” Professor Mohamed said.

GPA grading in education is the process of applying standardised measurements of varying levels of achievement in a course.  The GPA is not only a reflection of one’s academic capabilities but also a person’s commitment, perseverance and time management skills.

“A university education will set you apart,” Professor Mohamed stressed.

She also remarked that the students’ presence at the orientation meant that they made it.  “The fact that you are here means that you have developed a mindset, not yesterday, but a long time ago to make a decision to invest the time and energy in your life.”

The ceremonial opening wraps up a packed orientation week of activities.

As the university enters its 57th year, Professor Mohamed said she was happy to hear of that there were approximately four thousand new enrollments at the university; one of the largest to date.