The collaborative effort between the Ministry of Communities and the National Sports Commission will see posters of the 3G ambassador, Pompey, mounted at various sporting facilities across the country. 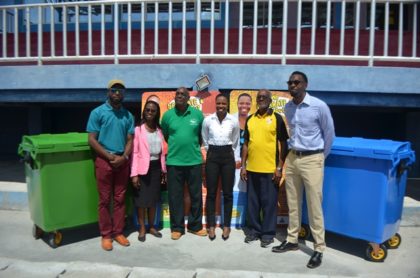 During the launching ceremony this morning, at the Leonora Track and Field Centre, Pompey expressed pride in being chosen to be the face of such an important campaign.

Stressing the significance of the programme, Pompey stated that “it is something that is very close to my heart. Obviously, Guyana is one of the most beautiful places to be and in the last few years that I have been able to bring athletes and other interested shareholders to Guyana mainly as part of the Aliann Pompey invitational, they have expressed the same.”

The sprinter was optimistic that the “entire country gets behind it so that we have a clean, beautiful and sustainable Guyana.”

Director of Sports, Christopher Jones noted that Pompey is the most suitable person to represent and advocate for the 3G’s programme.

Jones also echoed similar sentiments as the Olympian and called for more ministries, organisations and agencies to get on board and support the green initiative.

“We (National Sports Commission) recognize that the sports commission has several sports facilities and of course on a weekly or a daily basis we will have hundreds, if not thousands of persons gracing our facility and of course the emphasis, once you want to create a green environment, the emphasis must start at some level.”

As part of this morning ceremony, the Leonora Track and Field Centre was officially declared a litter free zone.