His Worship the Mayor of Bartica, Gifford Marshall said that the Mayor and Town Council (M&TC), regardless of its newness, continues to work in the best interest of residents of the township.

Speaking on Vybz 100.1 FM, Mayor Marshall said that since taking office, the municipality has held several capacity-building sessions with its councillors “so that they can understand their roles and responsibilities.” He said that similar efforts were made with community members, where they were informed about their duties and obligations to the council. 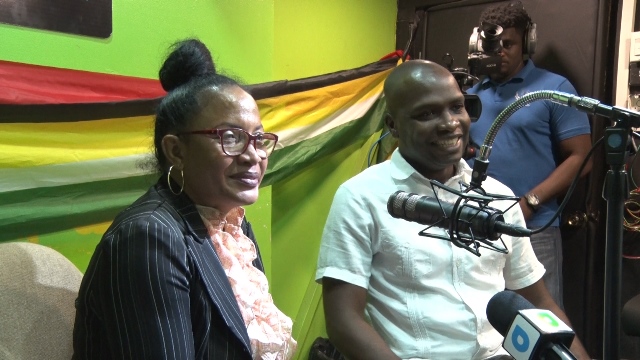 His Worship the Mayor of Bartica, Gifford Marshall and his Deputy, Arita Embleton, during an interview on Vybz 100.1 FM, on Friday.

Moving ahead with progress, the mayor said that for the remaining of 2019, the new town will experience a major facelift as plans are being streamlined for a beautification project. “We believe that our environment should be a reflection of us and we have a mandate as a green town. So, we have a lot of work to do,” he said.

Joining the radio conversation was Deputy Mayor of Bartica, Arita Embleton. She explained that residents have approved of the municipality’s work. “The people of Bartica are excited about what is happening and where we are going and they are signing onto our ideas. I trust that we continue to do our work and they continue to approve.”  The Deputy Mayor added that the support of Barticians has been “tremendous.”

Meanwhile, Mayor Marshall highlighted that some residents are having challenges with some of the changes that the municipality has implemented. One of those, he noted, is the adherence to building policies. He said in the past, residents could have constructed buildings without seeking permission. However, he emphasised today “there are rules and regulations which guides that process and must be adhered.”

Relative to rates and taxes, the mayor said, no increase in payment was applied. According to Marshall, residents continue to pay the normal fee – the same as ten years ago before the establishment of municipality. However, they are receiving more public services.

Bartica in Region 7, is described as the gateway to Guyana’s gold, diamond and timber areas. It was elevated to township status on May 7, 2016, by His Excellency President David Granger.