The 37th Regular Meeting of the Heads of Government of Caribbean Community (CARICOM) Member States continued today in Georgetown. Today’s session saw a private caucus among the Heads.

Guyana’s President David Granger before the commencement of today’s session indicated that one of the best things about the regional body is the movement towards the CARICOM Single Market and Economy (CSME). The President was at the time responding to a question posed by media representatives of the Jamaica Gleaner. 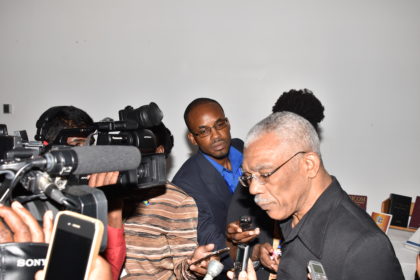 “All 15 Member States are concerned about the economy, and I’m very confident we’d be able to overcome those problems…we spoke about exit and solidarity, but we’re all focused on the economy,” President Granger explained.

He added that all the Heads of State want what is best for their people; however the single biggest question remains how quickly CARICOM can move to CSME and eradicate poverty, thereby giving their people a better quality of life.

During the two days Member states addressed common issues of concern such as regional security; advancing the implementation of CSME initiatives; and the border disputes that exist between Belize and Guatemala, and Guyana and Venezuela.

Bilateral sessions were held with the President of Chile, Michelle Bachelet who engaged Heads of Government as they sought to strengthen areas of common interests which include disaster related matters.