With at least three more days of rainfall expected, residents in flood-prone areas along the coast are urged to remain vigilant as the Civil Defence Commission (CDC) continues to monitor the situation.

Earlier on Tuesday, the commission conducted rapid assessments in some high-risk communities around Georgetown to evaluate the impact of the heavy rainfall over the last 24 hours. 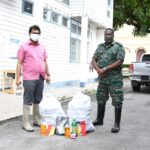 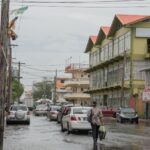 A flooded street in Georgetown 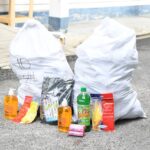 Some of the sanitization items

Speaking to DPI, Senior Response Officer of the CDC, Captain Salim October noted: “There is going to be increased rainfall over the next 48 hours.”

Captain October relayed that the CDC has embarked on a public awareness campaign on their social media platforms and are urging residents to take all necessary precautions.

He noted that the commission is working with the Ministry of Agriculture’s Hydrometeorological Service and several other stakeholders to mitigate the effects of flash flooding.

“They guide us with operational weather forecasting bulletins and we use those bulletins to extract pertinent information to present and package basic things that the public can do to ensure that their homes remain safe during the times of flash flooding,” he explained.

The Commission is also working closely with the Georgetown Mayor and City Council to bring relief to the residents in the most affected communities. This afternoon, the CDC donated a number of hampers containing sanitisation items to the M&CC to distribute to households affected by the floodwater.

In an invited comment, Mayor of the capital city, His Worship Ubraj Narine disclosed that the M&CC is currently working on a database to ascertain affected residents and will commence distribution of the items tomorrow.

The mayor disclosed that the municipality has activated the pumps around the city to enable faster water runoff.

He called on citizens to do their part and ensure the city’s waterways are kept clean and free of garbage.

The CDC is reminding citizens in high-risk areas to take the following precautions:

Persons are also reminded to adhere to the COVID-19 precautions. If you must render assistance, remember to wear a mask correctly and sanitise after rendering aid.