The Civil Defence Commission (CDC), this morning, opened the Light Search and Rescue Course, which aims to expose participants to specialised training, with the view of certifying them as trained search and rescue operators. The four-day course is being held in the Conference Room of the CDC headquarters, Thomas Lands, Georgetown.

Director General of the CDC, Colonel (retired) Chabilall Ramsarup, who is also the Chairman of the National Search and Rescue Committee charged the participants to capitalise on the opportunity to learn, as the Government aims to boost its national search and rescue capacity.

Colonel Ramsarup also said that the government is undertaking this important training as it recognises the need to augment its cadre of specialised emergency search and rescue personnel as many of the persons who were previously trained are no longer in the system. Further, he said, Guyana’s changing urban landscape demands that a trained team be ready to respond to disaster.

“What we are trying to do is put teams together … the more teams we have in Guyana is better for us so we could deploy more than one team at any one time and we recognise the need because the last training [was] done five years ago and we recognise that the number of those persons that were trained are no longer in the system. So we’ve got to add to our specialised skills in the country,” he said.

The CDC head said that the participants will be trained in teams to so that they can adequately support each other in the fields. The participants will be deployed in these teams for search and rescue operations and will be mobilised during national events. In this vein, he also revealed that the CDC is drafting an Urban Search and Rescue Plan, with a view to assembling a team that will then undergo Medium Search and Rescue training in order to boost national capacity. The CDC expects to complete this component by the end of the year, he said.

Meanwhile, Major Sean Welcome, Preparedness and Response Manager, who coordinated the Course, said it is “a very important process as it relates to [advancing] emergency management in Guyana and building our national capacity in Disaster Risk Management”.

Representatives from the Guyana Fire Service’s (GFS) Linden, Anna Regina and New Amsterdam branches, the Guyana Police Force, the Guyana Defence Force (GDF) Special Forces Squadron, the Cheddi Jagan International Airport, the Eugene F. Correia International Airport, Civil Aviation Authority, the CDC and others are participating in the course. The participants will be trained by GDF Captain Jose Ferreira and GFS Station Officer, Mr. Gregory Wickham, who were both trained in Trinidad and Tobago. 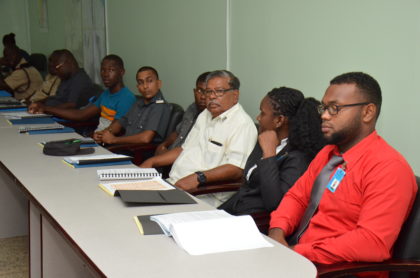 Colonel (retired) Chabilall Ramsarup, Director General of the Civil Defence Commission (third from right) with participants from the Guyana Police Force, the Guyana Fire Service and the Cheddi Jagan International Airport at the opening session of the Course 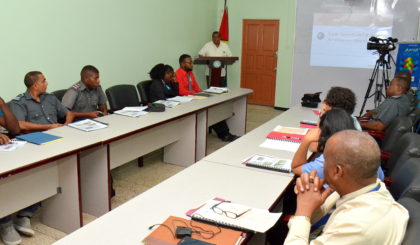