Works on the East Coast Demerara Road Widening and Improvement Project are moving ahead and the Ministry of Public Infrastructure (MOPI) remains optimistic in meeting key milestones. The multi-million venture, which began in the latter part of last year, is approximately thirteen percent complete and works are currently ongoing in the vicinity of Better Hope and Beterverwagting. 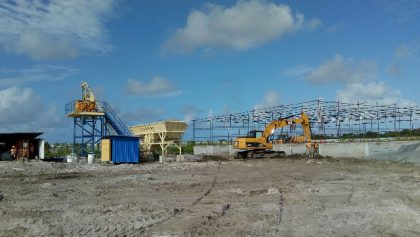 Speaking with the Department of Public Information (DPI), Nigel Erskine, MOPI’s Manager for Technical Services, explained that the contractor, China Railway First Group Company Limited, has already established a concrete batching plant and will be producing concrete exclusively for the project by mid-March.

The asphalt plant has also arrived in Guyana and is being set up. It is expected that by mid-April, the contractor will be able to produce asphaltic concrete exclusively for the project.

Approximately 1.2 kilometres of lower base course has been constructed to date. A total of 3.22 kilometres has been prepared by top-soil stripping and sub-base construction.

According to Erskine, 3.46 kilometres of drains has been prepared for heightening on both sides of the existing carriageway.  Concrete has been placed in 683 metres of these prepared lengths. A total of four hundred and fifty-six (456) meters of new concrete drains have been constructed.

“The major concern is the pace with which the relocation works are progressing and to address this Minister Patterson held meetings with the utility companies, and they have given assurance that they will complete relocation on schedule”, Erskine explained.

The project focuses on the widening of the roadway into four lanes between Better Hope and Annandale, thereafter, an Asphaltic Concrete surface upgrade to Belfield. Two bridges will be reconstructed, 11 traffic light signals will be installed along the busy intersections, along with street lights, road safety signs and other speed reduction devices will be installed along the roadway.

Erskine explained, “the plan that we are working with is to have the concrete drains completed and then complete the sub-base, base and surface works. We anticipate that by mid-April, the first 2.3 km will be completed.”