The 15-seater school bus and bicycles had been donated by Professor Suresh Narine, Director of the Institute of Applied Science and Technology and Mahdia businessman, Mr. Roger Hinds, respectively, to President David Granger’s ‘Five Bs’ or Boats, Buses, Bicycles plus Breakfast and Books Programme. 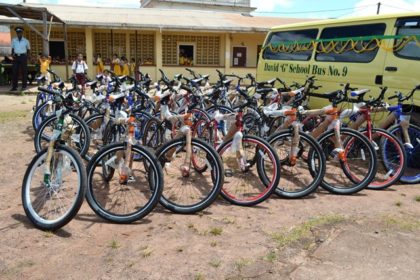 Twenty-five bicycles and the ‘David G School Bus No. 9’ in the compound of the Mahdia community centre

A large crowd comprising students, teachers, residents and graduates from the Self-Reliance and Success in Business Workshop braved the afternoon sun and assembled in the compound of the Community Centre to applaud the First Lady as she, with the aid of two children and Regional Education Officer (REdO), Mr. Rabindra Singh, cut the ribbon to commission the ‘David G’ School Bus No. 9’.

“I hope the children of Mahdia and surrounding areas get the best out of this vehicle,” Mrs. Granger said.

The First Lady also expressed regret for their absences, on behalf of President David Granger, who had, earlier that morning, travelled to Paramaribo, Suriname to meet with that country’s Head of State, President Desi Bouterse; and Minister of Social Cohesion, Ms. Amna Ally, who had another engagement. 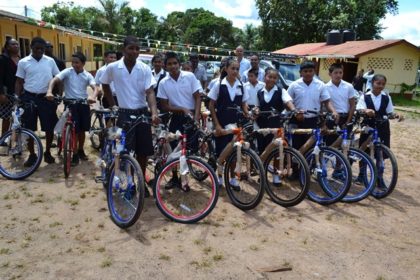 Some of the recipients display their brand new bicycles, which were donated under President David Granger’s ‘Five Bs’ or ‘Boats, Buses, Bicycles plus Breakfast and Books’ Programme.

Meanwhile, the Regional Education Officer expressed the community’s gratitude to the government and donors. “These kinds of gestures are very welcome in our community. It is going to help us a lot in terms of our truancy campaign and help the teachers and head teachers to ensure that our students are there on time. Time is very important in school for our curriculum delivery,” Mr. Singh said.

Meanwhile, Ms. Rajcoomarie “Gloria” Bancroft, Regional Councillor and Member of Parliament, said that the bus will serve students from far-flung communities. Fifteen bicycles were presented to secondary students, who hail from communities including Airstrip, Pamela Road, Beyond Campbelltown, St. Elizabeth Backdam and Mahdia Falls and travel long distances to get to school. The remaining ten bicycles will be presented to the top graduates from the recent Grade Six Assessment examination. 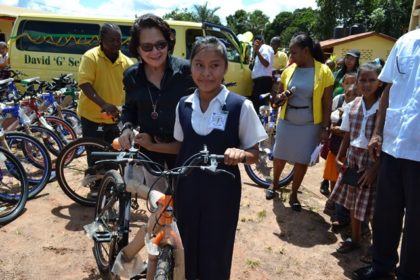 Ms. Bancroft then urged the children to care the bicycles. She also informed the recipients that Mahdia resident, Mr. Timothy Juno has offered to repair the bicycles at a reduced cost. 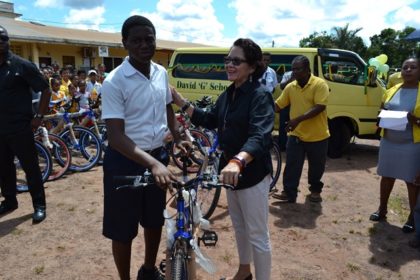 The First Lady smiles as this lad does his best to maintain his composure after having been presented with a bicycle. 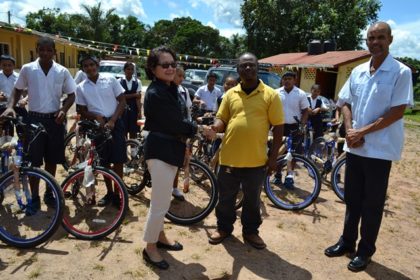