Trade officials at the Ministry of Foreign Affairs are being trained to put Guyana in a better position to conduct international trade. The training which is facilitated by the Ministry is expected to help drive economic growth. 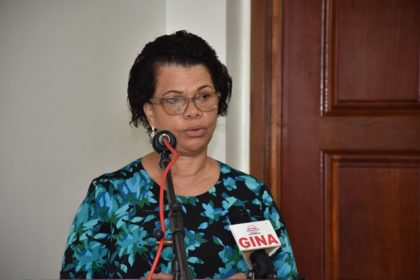 The five-day training which concludes on Friday is the fourth of a series of such exercises by the Ministry of Foreign affairs.

Minister of Foreign Affairs, Carl Greenidge at the opening session today, at the Foreign Service Institute, Shiv Chanderpaul Drive, said the officers are trained to monitor and advise the government on international trade policy, and also contribute to the process of negotiating trade agreements.

“You are privileged to have responsibility to deal with the interface of diplomatic community, but to participate and advise on international trade policy on which growth and development turns,” Minister Greenidge explained.

Minister Greenidge added that the skills being taught to the officers are paramount in helping Guyana to address the many challenges in international trade.  The Minister lamented that currently Guyana faces some very severe challenges in this regard which can only be addressed if there are skilled persons.

“One of the things that is most obvious is that the major institution on which our trade is managed today, has less skills than we had 30 or 40 years (ago),” the Minister noted.

Further, Minister Greenidge emphasised that when negotiating with international partners, there are certain processes and elements the officials must understand. “The country’s economic goals, trade structure, what are priorities what are weaknesses, the commodities and services we have for sale, what has to be protected, how to enhance sales and what constitutes challenges for us in negotiations are all factors to understand in international trade.”

The Minister also highlighted that the training is intended to ensure that the officials appreciate economic issues that affect the country; even

Trade officials participating in the training at the Foreign Service Institute

as he was encouraging them to take advantage of the training and use it as a stepping stone towards improving their country’s economic growth.

“We have a variety of very bright, skilled people, but we need to nurture that skill and create that enabling environment, and it is for that reason the Minister of Foreign affairs secured some key skills in the Ministry such as Ambassador Austin, and Ambassador Lucas to help us in trying to develop an institution that we can be proud of and produce the kind of results we would like to.”

Today’s training was conducted by customs expert, Brandford Isaacs and focused on some key areas necessary to strengthen trade in Guyana while simultaneously  responding to the immediate needs of the Foreign Affairs Ministry in this area. Similar exercises for the other officers will soon be launched.