The Guyana Livestock Development Authority (GLDA) through its Black Giant Poultry initiative is working to expand the production of eggs and poultry meat in hinterland communities, beginning with Regions Seven and Eight.

According to Deputy Chief Executive Officer of the GLDA, Dr. Dwight Walrond, the Black Giant Poultry initiative is aimed at fostering growth in eggs and poultry meat production, in the hinterland as a means of mitigating the difficulties associated with access to poultry as a source of protein. 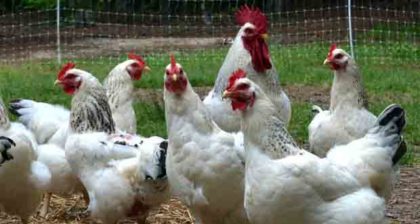 “Because of the logistics in moving feed stuff into the hinterland areas, we thought it best to have a breed that is adaptable to those conditions. The Black Giant can scavenge well in the yard system so we don’t need these commercial feeds for those birds and when we look at the amount of eggs they produce per year and the amount of meat from each bird, we think that that is the ideal bird to assist our hinterland communities.”

Walrond was at the time explaining about the initiative to the Government Information Agency (GINA), at the GLDA’s Mon Repos, East Coast, Demerara office.

Further, the GLDA’s deputy explained that the project will eventually be implemented in other hinterland and coastland regions, using the authority’s resources.

“We would have to work with Deep South, South Rupununi and if you know how these communities operate, we have a lot of village flocks, school flocks, women’s group and working with each one of them and supplying breeding stock to each one would be key,” Walrond explained.

As the project unfolds, with anticipated high demands for the Black Giant poultry, the Deputy CEO said that efforts are being made to ensure adequate numbers of the birds will be available for distribution to the various communities identified.

“To move this project forward in the following months we want to import some improved genetics. Again looking at these genetics from a country free of anyone of those diseases of economic importance to us, as you know we are free of bird flu, new castle and so on, so we don’t want those types of diseases here so we want to source those genetic materials from those countries which are disease-free,” Walrond pointed out.

The GLDA’s hatchery, located at its Mon Repos facility will also play a major role in making hatchlings available for the project.

“Our facility, our hatchery would help us to turn out the numbers that would allow us to make genetic materials available to those communities in a pretty short time, and then for us to move towards the coastal region, but for now our main focus is to have the hinterland have access to these birds so that they have access to cheap protein.”

The GLDA official sees this project as a fruitful one in the future, “and I know, not only the hinterland communities will grab hold of that, but also some of the coastal communities because if you look at the cost of creole eggs that’s a thriving business. On the coast now we have some farmers doing creole eggs only,” Dr. Walrond added.

According to the Ministry of Finance’s mid-year economic report the country’s livestock industry grew by 0.8 percent for the first half of 2016 compared to the corresponding period in 2015.

The Black Giant Poultry initiative is expected to lead to greater productivity of chickens among livestock farmers, improve biosafety in the industry, and reduce the cost of protein sources for consumers in the hinterland.