― traversing between Myrie and Borada Islands made easier

The Coalition Government, on Saturday, came in for high praise for the newly constructed bridge at Wakapau in the Pomeroon-Supenaam Region.

The timber walkway links Myrie and Borada, two of forty islands in the village of Wakapau. Minister of Public Infrastructure, David Patterson and Minister of Indigenous Peoples’ Affairs, Sydney Allicock officially commissioned the bridge and handed it over to the community at a handing over ceremony. The residents of Wakapau lauded the initiative noting that it was something they were denied by the previous administration.

The new timber walkway will benefit students, health workers, the elderly and persons who traverse between the two islands daily. Before the construction of the walkway, it was a hassle for residents to move between the two islands, as they had to use a makeshift bridge which was unsafe. While using the temporary structure, children and the elderly were more prone to accidents or being bitten by a snake during the rainy periods when water rose and covered the bridge.

The new structure boasts a wooden walkway complete with rails on both sides, benabs and lights, to aid with the safety of residents at night.

Residents during the official handing over ceremony of the walkway

School children cut the ribbon on the Wakapau Timber Walkway to officially commission it, as Minister of Public Infrastructure, David Patterson, Minister of Indigenous Peoples’ Affairs, Sydney Allicock and other officials look on

Eunis Thomas, a Wakapau resident for over 50 years

While speaking to the Department of Public Information (DPI), Toshao of Wakapau, Howard Cornelius stated that many requests through the Regional Council were made to have a more permanent structure erected but it seemed to have “fallen on deaf ears” under the previous government.  “I don’t know what the reasons for not funding it were but now it is being funded through the ministry and we are very happy and thankful for it,” Toshao Cornelius expressed.

According to village councillor, Oscar Phillips, the construction of the walkway will ease the burden of traversing between the two islands especially for school children. “We suffered for years until now, and personally, as a representative of this area, I am very thankful.”

Eunis Thomas, a resident of the community for over five decades, could not contain her appreciation. She told DPI that the construction saw “one of the greatest dreams” of the community realised.

Richard Thomas, another resident of the community, branded the initiative as an “accomplishment” noting that the lack of proper facilities was a “major setback during the years under the previous administration”.

Wakapau is an Arawak village located along the Wakapau River in the Pomeroon. The construction of the $20M bridge will benefit some 1,800 residents in the community. The project was initiated in July 2018 after residents raised concerns about the deteriorating conditions of the previous structure. 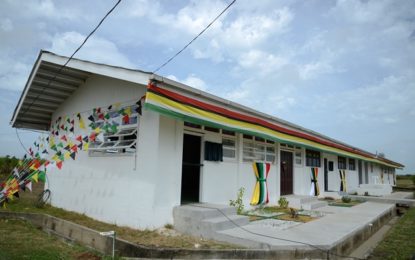