The Ministry of Public Health, in collaboration with Global Fund today, signed a grant agreement awarding the Alpha and Omega Community Health Associates, and the Society Against Sexual Orientation and Discrimination (SASOD), $28M. The grant is expected to be used to help reduce  HIV/Aids in Regions Two, Three, Five and Ten. 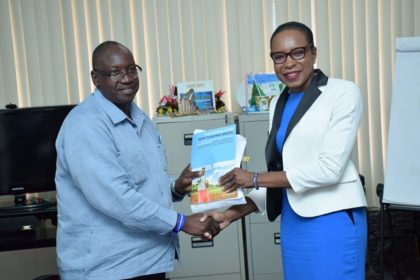 Minister within the Ministry of Education Nicolette Henry told media operatives at the signing that, “The Global Fund programme deals with Malaria, TB and HIV, however this grant is specifically for HIV.”

Over the next 14 months, extensive works will be done in the regions for infected and or affected persons. 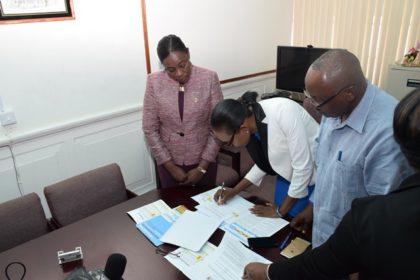 Minister within the Ministry of Education, Nicolette Henry along with Ava Marie Lindie of Alpha and Omega Community Health Associates signing the grant and Trevor Thomas, board member of Global Fund

(NAPS) said that Global Fund has a number of implementing partners. Since the Cicatelli grant ended in June 2016 they had advertised and after a review of five organisations, the two successful applicants were the Alpha and Omega Community Health Associates and SASOD, both Non- Governmental Organisations (NGOs).

Dr. Karen Gordon-Boyle, Director of the Alpha and Omega Community Health Associates said the NGO has, “Extensive experience working with key population and our methodology is that we engage NGOs from those regions. That means that we are going to be able to reach them with HIV prevention messages, HIV testing, anybody found positive will be enrolled in treatment centres.”

Minister Henry sits as the chairperson for the country coordinating mechanism which manages Global Funds.