Guyana and the United States of America today signed an agreement for the exchange of information under the Foreign Account Tax Compliance Act (FATCA ).  The agreement was signed by Guyana’s Minister of Finance, Winston Jordan and US Ambassador to Guyana, Perry Holloway. 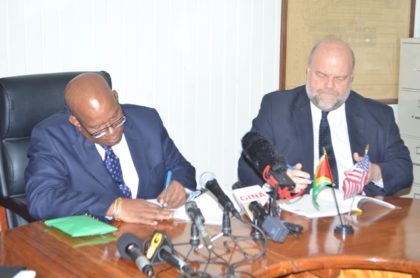 Hon . Winston Jordan Minister of Finance and Ambassador of the United States of America to Guyana, Perry Holloway signing the FATCA agreement at the Ministry of Finance, earlier today

At the signing of the agreement, Minister Jordan said the agreement represents another step in the cooperation between Guyana and the US to combat money laundering and tax evasion and avoidance.

He said that the sharing of information across countries is important for the enforcement of domestic tax laws.  “By working together to increase transparency, both Guyana and the US will be able to detect and deter abuse of the tax system in both countries.  This will enable better accountability within the global financial sector,” Jordan said.

According to the minister, the agreement which was signed in the Board room of the Ministry of Finance will allow for the exchange of banking and tax information for citizens residing in both countries as foreign nationals.

Describing the signing as an historic event, Jordan said the agreement represents both the culmination of a long travelled road and the beginning of a new phase in Guyana-United States cooperation in tax and anti-money laundering matters.

FATCA was enacted in 2010 by the US Congress to prevent tax fraud and evasion by US taxpayers using offshore banking facilities. It creates a new regime of automatic tax information sharing between financial institutions. FATCA requests foreign financial institutions to identify and report information about accounts held by US taxpayers in their jurisdictions. FATCA is part of a global movement towards Automatic Exchange of Information (AEIO) of non-resident financial account data among tax authorities.

According to the Minister of Finance, “The Automatic Exchange of Information has the potential to increase transparency, cooperation and accountability among financial institutions and encourage tax payers to voluntarily disclose all relevant information to tax authorities.

He said Guyana chose to be involved in this important venture not only because it will help to reduce tax evasion in the United States, but also in Guyana, through the exchange of information between the two countries.

The enforcement of the FATCA required the Government of Guyana to amend local laws to empower the Guyana Revenue Authority to send and receive information as may be requested by any of the two signatories. 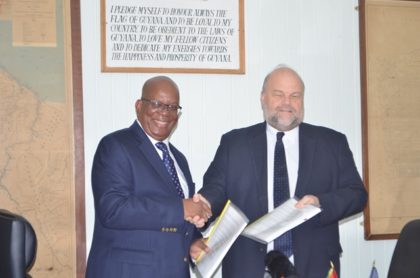 Hon. Winston Jordan Minister of Finance and Ambassador of the United States of America to Guyana, Perry Holloway displaying the signed FATCA agreement at the Ministry of Finance, earlier today

Citing recent developments which saw the Bank of America pulling out as the correspondent bank to Guyana’s banking sector, the minister said regulations such as FATCA will aid in a return of stability and trust in the country’s financial sector.

According to the finance minister, the implementation of FATCA is only one aspect of Guyana’s recent efforts to strengthen the regulation of its financial sector.  He pointed to work done to satisfy recommendations of the Financial Action Task Force (FATF) and a National Risk Assessment that was undertaken this year among other initiatives.

Meanwhile Ambassador Holloway expressed pleasure at the signing of the agreement. “Today’s signing marks a significant step forward in our countries efforts to work collaboratively to combat off shore tax evasion an objective that mutually benefits our two countries,” Holloway said.

According to the ambassador, the exchange  of information is a top priority for the United States and as such his country has been leading in the development of new international standards for greater transparency for changing tax information.

According to Holloway, the signing of the agreement is another example of a the commitment of both countries to a stronger more stable and more accountable global financial system by working together to detect, deter and discourage off shore tax abusers to increase transparency and enhance reporting.

“I hope that the US Guyana FATCA agreement will serve as another example of the deep substantial links that positively bind Guyana and US economies,” Holloway said.