– “Guyana’s food is like gold in Trinidad” – Carnegie Principal

– ‘Pepperpot’ was one of the showstoppers

Cook up, chicken curry, carrot rice was among many the mouthwatering Guyanese dishes that were on the menu at the CARIFESTA XIV ‘Grand Market’. The palate-pleasing dishes quickly sold out as patrons flocked to sample our local cuisine.

Staffed by members of Carnegie School of Home Economics (CSHE), the local cuisine at the event rivalled to that of their neighbours. The fascination with Guyana’s food booth quickly picked up momentum, according to Carnegie Principal, Myrna Lee. 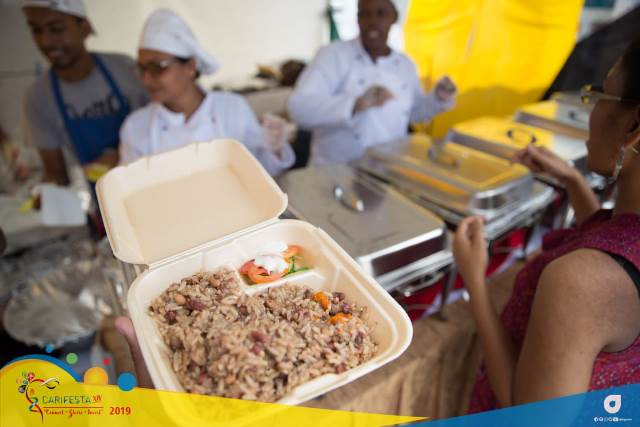 Guyanese ‘Cook-up rice’ – the local dish being purchased by a patron at the CARIFEST XIV ‘Grand Market’. 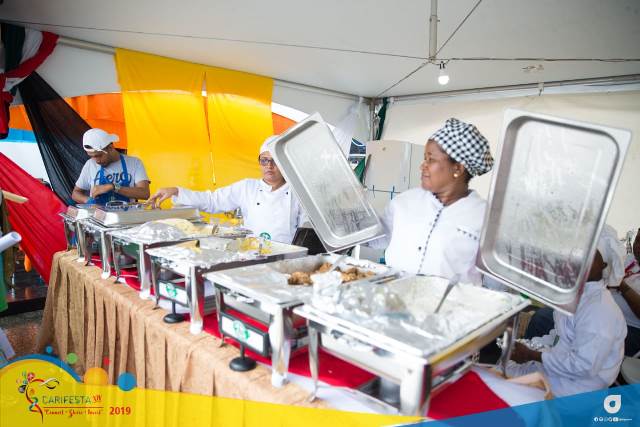 The team from the Carnegie School of Home Economics (CSHE) operating the booth at CARIFEST XIV ‘Grand Market’.

“Guyana’s food is like gold in Trinidad. They really love the food not only the Trinidadians but persons from other territories… What is interesting is that they know the dishes by the name. They know the variations of a particular dish, for example, one patron asked for a ‘Buxtonian cook up’.  Also, in high demand was our cassareep. They asked for the ingredients to make pepper pot… they wanted the pepper pot,” Lee said.

The Carnegie School of Home Economics’ staff and students, who comprised the team to man the booth, shared their experience with the Department of Public Information (DPI).

Radha Singh, a member of staff at CSHE said that she “found this CARIFESTA to be more exciting… The last I attended was in Haiti, and the response and vibes here are positive… I feel proud, I feel patriotic. I feel good with the response we have received… there has been good feedback on our food because we have a wide variety.”

Singh noted that the positive response and love shown by patrons for the dishes on sale at the Guyana booth are as a result of the different spices used, in particular, the country’s masala. She echoed Lee’s sentiments that ‘Pepperpot’ was one of the showstoppers.

“Most persons heard about ‘Pepperpot’, and so they would ask someone to bring cassareep… however, their result is not the same. So, when we brought out the Pepperpot, it quickly became a fan favourite which is great,” Singh said.

Lawrence Joe, a second-year student attached to CSHE, is loving every moment of the festival. He shared that persons he encountered noted the “Guyanese hospitality shining through”.

Lee said members of the team were selected from the institution’s flagship programme – Catering and Hospitality, which usually chooses first and second-year students for events like these. She explained that this programme helps to train students so that they can perform with little supervision.

Meanwhile, some of the lucky patrons who sampled the dishes could not get enough.

Tamisha Edwards, from the Cayman Islands, said that trying the cook-up was more a comparison test for her homeland’s ‘Rice and Beans’ dish.

“I bought cook up with veggies chunks, and we do a similar thing in the Cayman Islands, and we call it ‘rice and beans with coconut milk’… it is done the same way… it is pretty much flavoured the same way, same spices… it is very delicious for sure,” she explained.

Another patron, Jeremy Joseph, of Antigua and Barbuda, said while he thoroughly appreciates and loves Guyanese dishes, it is not something new as his wife is from Guyana. “My wife sent me a message to get her some Guyanese curry and roti, and I am dying to go and eat it,” he said, beaming with excitement.