Both Indigenous Ministers today called for the selection of more hinterland athletes for national teams. The appeal was made at the opening of the 2017 Indigenous Heritage Games at Everest Sports Ground, Eve Leary. 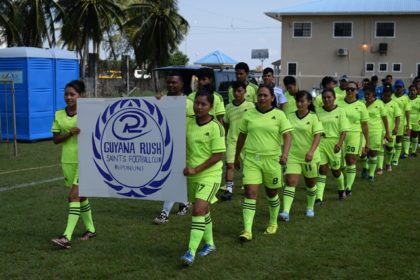 The athletes during their March Pass.

The games run from September 22-24 and will feature athletes from indigenous communities in the ten administrative regions competing in cricket, football, volleyball, archery, and swimming.

Minister of Indigenous Peoples Affairs Sydney Allicock wished the athletes success in the games and urged them to put their best foot forward. “I would like you to make the best of it, make new friends, look for opportunities, who knows, you would be part of the national team”, the Minister encouraged.

He further added that the hinterland possesses a tremendous pool of talent that needs to be tapped into and referred to the recent Digicel football competition, which saw two hinterland teams displaying a wealth of skills and placing second and third in the competition, as an example

Minister within the Ministry of Indigenous Peoples Affairs Valerie Garrido-Lowe encouraged the athletes to use the Games as an opportunity to advance their selection on various national teams.

Both Ministers gave their assurances that the Ministry will continue to support hinterland sports, in view of the fact that President David Granger has given his assurance to raise the level of sports countrywide. 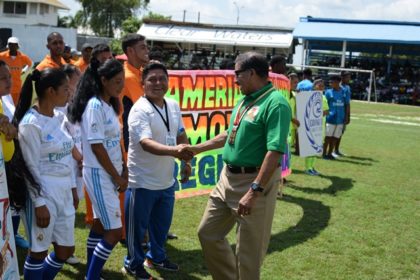 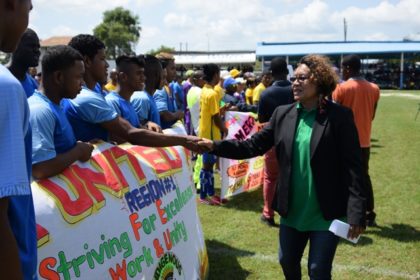 Minister within the Ministry of Indigenous Peoples’ Affairs Valerie Garrido-Lowe greeting the athletes.

The athletes during their March Pass.