Investiture Ceremony 2018: “Public manifestation of appreciation for those who have rendered exemplary service” – Pres. Granger

− 97 honoured for exemplary service, 49 women among them
− 93-year-old retired Prison Officer, Vernon Lambert is this year’s oldest recipient to receive the Medal of Service
− “The National Honour System under which National Awards are conferred is not a ceremonial or cosmetic ritual”
− National Awards should never again be disparaged or debased

Ninety-seven (97) persons, including 49 women, were today conferred with National Awards by President David Granger, at the 2018 Investiture Ceremony hosted at the National Cultural Centre (NCC).
The Head of State, in his address to the awardees and the gathering, said the nation has a duty to honour those persons who have rendered selfless service to the country.

“Our nation has an obligation to pay homage to those distinguished sons and daughters who through precept and example have provided outstanding service to their communities. Our nation honours them out of respect for the values which they exemplify and to contributions they have made and continue to make,” the president noted.

President Granger described the National Honour System as a supreme symbol of statehood reserved for those persons who have distinguished themselves in service to the nation.

“The National Honour System under which National Awards are conferred is not a ceremonial or cosmetic ritual as some seem to think, it is an essential cultural convention in civilized society used to express appreciation to those who served selflessly,” the Head of State further noted.

The president said National Awards should never again be disparaged or debased through capricious conferment, deeming today’s Investiture ceremony as a public manifestation of appreciation for those who have rendered exemplary service.

A section of the gathering at this year’s Investiture Ceremony 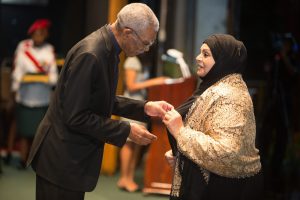 President David Granger conferring the Golden Arrow of Achievement on Head of the Women’s Arm of the Central Islamic Organisation of Guyana (CIOG), Aleema Nasir 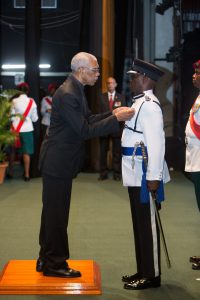 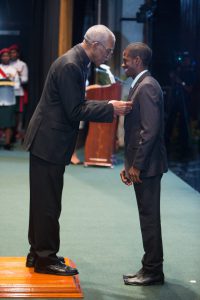 Aleema Nasir and several others were conferred with the Golden Arrow of Achievement.

Executive of the Demerara Distillers Limited (DDL), Komal Samaroo; Historian and Professor of the University of the West Indies (UWI), Alvin Thompson; and Justice Olsen Small were all awarded the Cacique’s Crown of Honour.
Chancellor of the Judiciary and Chairperson of the Advisory Council of the Orders of Guyana, Justice Yonette Cummings-Edwards delivered the statement regarding the Orders of Guyana.

The event also featured a cultural presentation in the form of dance and renditions by the Guyana Police Force Band and Choir.

The Order of Service of Guyana is the third ranking order of Guyana. It consists of six awards that are divided into general awards and special awards.

The Medal of Service is the fifth highest award of the Order of Service of Guyana. It is awarded for ten years of dedicated public service, local government service, service to industry, service to trade unions or other areas of service to the community.

The Golden Arrow of Achievement is the fourth highest award in the Order of Service of Guyana. It may be awarded also to “any citizen of Guyana who has performed an outstanding and specific act of service or achievement of an exceptional nature, or is given for long and dedicated service of a consistently high standard in responsible offices, local government services, social and voluntary services, industry or trade unions, or in any other area of public service.”

The Cacique’s Crown of Honour is the second highest award in the Order of Service of Guyana. It is limited to fifty citizens of Guyana. It may be awarded to any citizen of Guyana who has “rendered service of an exceptionally high quality beyond the normal call of duty in the public service, social and voluntary services, industry or trade unions, or in any other area of public service, or achieved excellence of national or international standing and recognition in the arts, professions, sciences or sport or in any other area of activity.”