With the commissioning of the $130Million Hinterland Green Enterprise Centre at Bina Hill, Region Nine, residents in other regions are eagerly awaiting their turn for a similar technical institute.

In Region Eight, Potaro-Siparuni, resident Gloria Williams relayed that such a facility would indeed open up more educational opportunities for young people.

“I think it’s a really good idea, persons would not have to travel to town to study, it can be done right here at home. This would ease the burden on parents,” Williams noted. 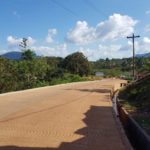 One of the rehabilitated roads in the township of Mahdia Region 8. 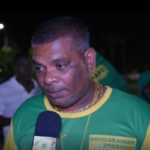 Similar sentiments were echoed by, Zolinda Andrews, who also felt that this move by the government will indeed ease the financial burdens of parents.

“I have grandchildren coming up so this would be great for them and every other child in Region Eight. I am thankful.” Andrews stated.

Meanwhile, 18-year-old Felisha Arthur, who is from Region One but visiting relatives in region eight, is also excited at the prospects of a technical institute in her region.

“It is a good initiative, the government is working and investing in the hinterland. I am happy for region eight, and really excited for my own region as well,” Arthur told DPI.

Bus driver Farose Mattoo was also equally in support and welcoming of the initiative for the region. “This will serve the young people well, give them something more to do aside from mining alone,” he noted.

Mattoo also expressed satisfaction with work the administration has done paving the roads in the region. “After me and my children, even my grandchildren these roads will still be here. Government is doing an excellent job.”

On February 7, the Hinterland Green Enterprise Centre at Bina Hill was formally commissioned in the North Rupununi. It has eight classrooms, a modern computer and science laboratory, a large auditorium and lecture room. It can accommodate up to 120 students at the same time.

This initiative is part of President David Granger’s Ten-Point Plan for Hinterland Development, specifically his Hinterland Education Support Programme, where an institute like the Government Technical Institute, (GTI), in Georgetown, is mirrored in specific hinterland regions, namely; regions one, seven, eight, nine and ten.

That specific plan seeks to ensure that every child, regardless of geographic location gets a sound education.