Minister of State Joseph Harmon today debunked accusations made by Sase Singh that the government is practicing “ethnic preferences” in the selection of Permanent Secretaries. The dismissal of the claims comes on the heels of a letter published in the Kaieteur News dated Friday, June 16, 2017.

The Minister while addressing media operatives at Cabinet’s weekly press bringing said that Singh needs to do proper research before making such claims. According to the Minister, such accusations are not only false but that they affect the people who they being made against. 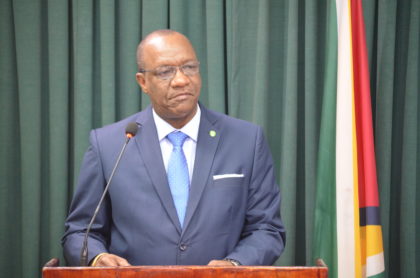 Minister Harmon pointed out that according to Singh, “anybody that is not Indian is African, that is how he started off and so anybody else in that mix of Permanent Secretaries that were there who was not an Indian was considered to be black” adding that Singh “should examine things carefully because some of these things affect people and they are very upset and annoyed when they are branded in a certain way by people who write and do not do their research properly before they write.”

Minister Harmon explained that “Permanent Secretaries who are there now were all in the system and so what we said was that we have to give the public servants upward mobility and therefore whenever any PS be removed, we look internally in the public service for the senior persons who have been there serving and have the qualifications and we move them up.”

Minister Harmon sternly stated that, “I want to debunk that nonsense that that Sase Narine is going on with and that he should examine things carefully before he continues on this charade of trying to create a bogie as if to say that this government is ethnic cleansing and we are only appointing certain people.”

Additionally, the Minister said that reassignment came as there was a need for more qualified and professional Permanent Secretaries. This led to four former PSs undergoing training in capacity building under the Caribbean leadership programme.

Singh in his letter to the editor in the Kaieteur News stated that, “today the evidence is there to prove that we have a real situation of ethnic bias under the Granger administration. As an example, look at the 16 Permanent Secretaries in the Granger Government. Fifteen of them are from one race and these facts cannot be washed away.”Minister Harmon noted that at no point in time the government seeks to have ethnic considerations when selecting persons to serve. In March 2017, several Permanent Secretaries were reassigned to different Ministries while others were relieved of their duties.

According to Minister Harmon, when the government took office their intention was to ensure that the quality of service provided by the public service was at a level which they can be proud of. The Minister said that the PSs who are currently assigned to the various Ministries are a part of the new public service.