Minister of Foreign Affairs meeting with the Korean Ambassador

On Tuesday, June 13, 2017, Guyana’s Honourable Vice President and Minister of Foreign Affairs, Carl B. Greenidge, and  newly appointed Ambassador Ki-mo Lim of the Republic of Korea to the Forum of East Asia-Latin American Cooperation (FEALAC) and the Caribbean Community (CARICOM) met to discuss several areas of mutual relations.

Ambassador Lim explained that his focus would be in the interest of climate change, security and information communication technology (ICT), among other areas. In response, Minister Greenidge stated that Guyana as a founding member of CARICOM had consistently ascribed to the Organization’s activities.  In this regard, he looks forward to continued cooperation with the Republic of Korea.

CARICOM and the Republic of Korea established bilateral relations since 2007. 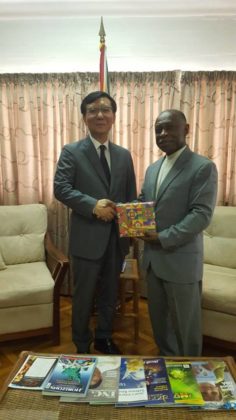