The Ministry of Education and Peace Corps Guyana today signed a Memorandum of Understanding (MOU) aimed towards greater collaboration in the education sector.

At the signing, the Minister of Education, Nicolette Henry highlighted the importance of the document noting that it marks the re-establishment of a partnership that began in 1966.

“This MOU will serve to strengthen capacity and capability of our school system which involves parents, students and our entire communities. When we come together and we forge strong partnerships and collaborate, only good things can happen.”

She further added that the MOU strengthens the mutual relationship between the Education Ministry and Peace Corps and establishes Peace Corps’ support for the Ministry’s key initiatives which include the National Centre for Education Resource Development’s pilot Literacy project, Education for Sustainable Development project and the system-wide rollout of the revised Health and Family Life Curriculum.

Peace Corps Guyana Country Director, Kury Cobham noted that this places volunteers in roles that match their interest and expertise and the MOU establishes their support for the initiatives.

“It lays out the roles and responsibilities of each of us in achieving mutual goals and objectives… We are therefore excited to update our partnership today by signing a new MOU with the Ministry of Education” Cobham said. 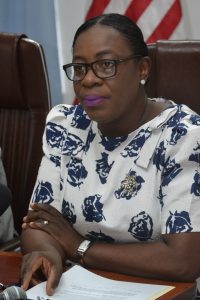 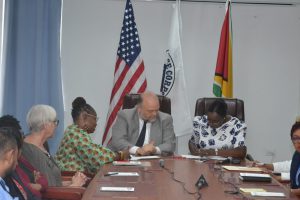 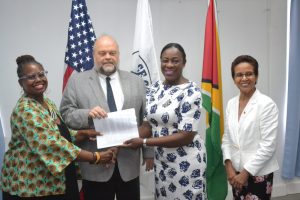 Touching on the importance of cooperation between the United States and Guyana was US Ambassador Perry Holloway. He maintained the United States commitment to Guyana saying, “as long as the government of Guyana, ministers like Minister Henry and the people of Guyana want us to be here to cooperate with Guyana, we will be here.”

Peace Corps Volunteers have served in Guyana since 1966. From that time, they have operated under MOU’s with various government ministries. The country currently hosts 40 volunteers with an additional 37 in training which is set to be completed on August 15. These will be posted to the communities in all the regions with the exception of Region Eight in September.

Peace Corps’ partnership with the government and people of Guyana aims to achieve the sustainable development goals of Education, Health, and Environment.