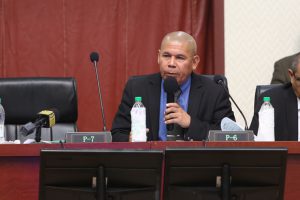 Speaking at the 13th National Toshaos Council Conference held at the Arthur Chung Conference Centre (ACCC), Minister Norton reminded the Indigenous leaders present of the progress made over the last few years. According to Minister Norton, the Government of Guyana through the Department of Social Cohesion continues to make significant strides towards the development of all of the Indigenous communities.

He explained that in its continued efforts, more community/sport grounds will be built, more sport officers will be mobilised and additional training will be made readily available.

Recognising the need for immense support towards the development of sport and its cultural preservation, Minister Norton urged all the leaders to have their communities utilise the services provided, adding that the department will continue to contribute to their development.

Engaging Toshaos and council members of Mabaruma, Jawalla and Matarkai, he underscored the significance of youth and social development for Indigenous Peoples.

“Social cohesion is not only about fostering good relationships, but it’s also about creating access so that every Guyanese can experience the benefit of all of the opportunities provided,” Minister Norton remarked.

While delivering his remarks, Minister Norton commended the NTC for enlisting such a large number of women to serve and be elected for office citing His Excellency, President David Granger’s commitment to maintaining gender balance in government.

He further praised the youth in leadership who are actively pursuing development opportunities for their communities, applauding them for practising their civic responsibility and continually breaking barriers.

The NTC Conference was held October 7-11, 2019, themed “Guyana’s First Peoples United in the promotion of a Green Economy through the Preservation of our Languages, Lands and Rights.”