“It is my wish and by extension, the Government’s desire to see an improved difference in the way Mashramani is administered to make more impact where the value for money is seen and a Guyanese culture is presented and preserved.”

Such is the utterance of Hon. Minister Nicolette Henry, Chairperson of the newly formed Mashramani Central Planning Committee at the first meeting of minds tasked with planning and executing a most successful and memorable Mashramani list of activities for 2018. 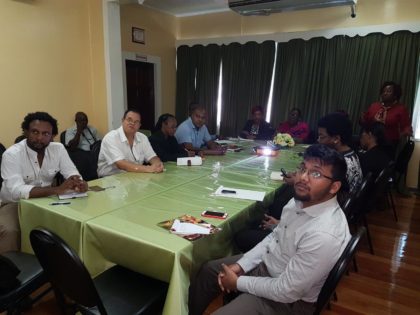 As the Ministry of Education Department of Culture Youth and Sport wraps up the organising aspects for a seventy (70) strong contingent to represent Guyana at CARIFESTA XIII in Barbados, planning for a successfully more improved hosting of Mashramani 2018 festival has commenced.

On Wednesday, the first meeting of minds who are part of the National Planning Committee met in the boardroom of the Ministry of Education Department of Culture, Youth and Sport, Main Street.

There with Hon. Nicolette Henry as the Chairperson in the presence of National Events Coordinator Lt. Colonel Godfrey Bess and Permanent Secretary Melissa Tucker the team of new faces (were) was treated to a proposed initial plan that may form the content of an enhanced Mashramani/ Republic Celebration for 2018.

It was agreed by those present that the road to an early launching of the road map and schedule of events must begin soonest; as such the first order of business is the selection of an appropriate theme to encompass all the activities. It was agreed that by July 31, 2017, there should be a collection of submitted theme ideas from the public that would fashion a direction under which all activities will be hosted.

Hon. Minister Nicolette Henry as chair stressed the need for continuous planning and commitment to the tasks at hand 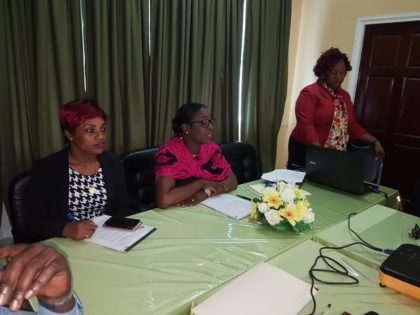 to make Mashramani as grand and at an improved more dynamic level. Dates for events would be revised including the launch of the theme as well as all activities. A regional briefing is planned to take place soonest for issuing of directives to all regional points of contact. As regards to the route Minister Henry noted that Mashramani is a Guyanese activity and given (that) a list of possible options (to her) by the Guyana Police Force it would be left up to the new committee to make a selection for possible consideration. The Minister noted too that the committee’s decision would be taken to cabinet and cabinet will make the final decision on the most appropriate route to be used for the float parade that will end at the D’urban Park venue.

While the Government’s budget for the Mashramani 2018 National activities will be decided on after submissions are made, Minister Henry stressed the need for Transparency in all dealings by those involved at the Central Committee level.

Some of the issues addressed included options of consideration(s) of judges’ rotation as well as the venue selections for all competitions.

There could be some amount of reworking for the Chutney Monarch for more inclusion at the organising level. Minister Henry as Chairperson of the Committee proposed that efforts will be made to engage Ansa McAl and other corporate citizens for the reintroduction of the Soca Monarch competition in 2018. There were much discussions about Steelband for concerts nationwide as an addition to the Republic Bank sponsored Competitions.

The government is the main contributor to Mashramani being a success but efforts are to be made to motivate more private sector involvement in all areas.

It was noted, however, that persons need to understand,( however), that concessions cannot be given just because they want it, as tax collection is the main means through which Government generates needed finances to run the developmental affairs of state.

Minister has encouraged the need for a database to be created for designers to encourage all Ministries to support them.

Underscored was the idea to move away from the idea of carnival ‘copycatting’ and focusing more on presenting a unique original Guyanese culture and brand.

More Marketing and Public Relations as a need was a sore point which will be given serious considerations.

The team has been tasked with creating a plan where benefits are across the board and the idea of the development of a festival village in a standardised fashion that is economically viable is also up for consideration.

Director of Culture (ag) Ms Tamika Boatswain during her grand power point presentation noted that as a priority in a matter of days Convenors would be named who will be tasked with managing and overseeing the successful staging of National events such as Junior &amp; Adult Calypso as well as Soca

Monarch competitions. Chutney as well as and Indian Dance Competition are also on the cards as well as regional Steel Band concerts. The latter would be part of the equation for the annual Republic Bank Panorama. Further, Masquerade may be given a makeover to ensure more participation and public support while a Literary Street Fair that encompasses Visual Arts is scheduled.

While there are many activities that will form part of the Mashramani Calendar of events much emphasis is to be placed on enhancing the costume and float parade through public and private support. The idea, Minister Henry stressed, is to encourage more participation from Government

As opposed to the regular Bright up Guyana component the option of promoting a’ clean and bright up Guyana’ initiative has been mooted. The plans may more than likely also see the staging of a Republic Lecture series, a Child Art and Essay Competition and a Mega Family Fun day.

The team at the first meeting which engaged in healthy discussions ahead of the selection of convenors, comprised Ministry and Government representatives as well as several media operatives, Corporate Citizens and the private sector as well as public figures ,all of whom boast (s) a wealth of fresh executing ideas to breathe new life into the nation’s Republic/Mashramani celebrations.

The team agreed that Mashramani is not Carnival and should never be seen nor promoted in such a light.