Pleasurable Flavours…. The story of how a Linden woman has crafted a successful business using her hands

As a parent one always wants to make sure that one’s children have everything that the parent didn’t have, especially when it comes to education. Sometimes circumstances that are often described as beyond people’s control motivate and propel them to use these as stepping stones for greater things.

The entrepreneurial story of Dianna Plowell from Ameila’s Ward, Linden, Region Ten, is centered on sacrifice and the love of a mother for her children.

Diana told the Government Information Agency (GINA) that one of her daughters had received a scholarship and she could not afford to send her to pursue her studies due to financial constraints. She described how distraught she was, crying and wondering how she could make her family’s life better and improve their standard of living. 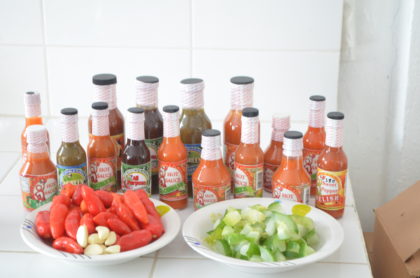 She related that amidst the tears and hopelessness, one day she heard a voice saying, “What do you have in your hands? Use that!” She described the voice as that of ‘Almighty God’, speaking to her.

Diana is good with her hands; she makes everything in her house and even does embroidery. She was always making different items for people including plantain chips, chicken foot, pepper sauce, and achar.

On February 23, 2012, while many were in Georgetown enjoying the Mashramani celebrations, Diana remembered that she had a “big gallon bottle”  of pepper sauce, and it then “clicked that I have a bunch of small vodka bottles that my father use.”

She proceeded to wash, take off the labels and fill the vodka bottles with the pepper sauce. At the end of that process, she had 25 bottles which she then took right into her community of Amelia’s Ward and sold them for $200 each.

Diana then realised that there are more than one flavour that can be mixed with the pepper to create lovely sauces. Her business has been in operation for five years and ‘Pleasurable Flavours’ now has variety to its name. You can get green seasoning, cucumber, pawpaw, corilla and souree pepper sauce, an all-purpose seasoning, sweet pepper relish and mango hot sauce. 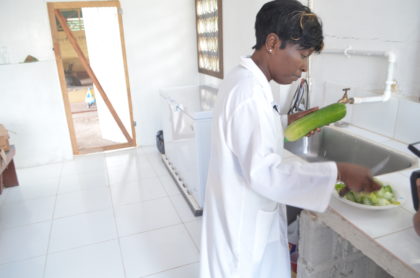 Diana said that her pepper sauces are very popular; her all-purpose seasoning can be used as dipping sauce for fish, chicken tenders and even used to season meat.  Her sweet pepper relish is one that is growing in popularity. Diana described this product as one that caters for the person that is not “a fan of the heat (pepper) but always wants a little kick or a different taste while eating.” Each of her products has a shelf life of one year.

Dianna told GINA that it has been five years that she has “gotten out of bed” and started making this (pepper sauce) for resale and improved her family life. She expressed pride in what she has achieved thus far, even though she did not get to send her daughter to Canada because it is “a process of making the money.”

However, the experience has taught her that she can do anything with her hands because God has blessed her. Diana plans on improving the company noting that the “sky is the limit”.

She pointed out that there will be new products under the brand of ‘Pleasurable Flavours’. Diana also makes fudge with and without coconuts, plantain chips, and sugar cake among others Guyanese sweet meats.

Describing the local response to her products, Diana said that it is amazing how the local market takes local products. She said that some persons see local products as “not good”. However, at first when she approached stores and supermarkets her packaging was not up to standard, but she understood them being cautious in taking products.

Diana, with a bright smile on her face, related to GINA that her products are reaching international standards, “…right now if you hold up one of my products and a product from overseas you would not be able to tell which one is local or which one is from overseas.”

Diana has two small export markets, Suriname and Trinidad and Tobago. Diana is confident that when “all the stores and supermarkets get a hold of Pleasurable Flavours’ products, they will not have enough to supply the demand.”

You might be wondering how the name ‘Pleasurable Flavours” came about. Diana explained enthusiastically that, it was a process where she threw out the challenge to her friends in Amelia’s Ward and asked them to come up with a name to brand her products. She approached four persons for a name for her company. She said she loved Pleasurable Flavors’, because it complements the vision of the products that she produces which is: “You must enjoy eating your food while incorporating a pleasurable flavour”.

February 23, marks the fifth anniversary of the Pleasurable Flavours line of products, which can be found at the Guyana Shop, Robb and Alexander Streets and at many supermarkets. Diana can also be contacted on 681-4810 or 442-4317 for orders.