Georgetown, Guyana – (September 25, 2017) President David Granger is scheduled to meet with United Nations (UN) Secretary General, Mr. António Guterres later today. Minister of Foreign Affairs, Mr. Carl Greenidge in a brief interview in New York, this morning, said that, “we will draw to his attention the concerns of Guyana that this matter be resolved in a definitive matter and to impress upon him that he has obligations as it regards time and the manner of resolution.” 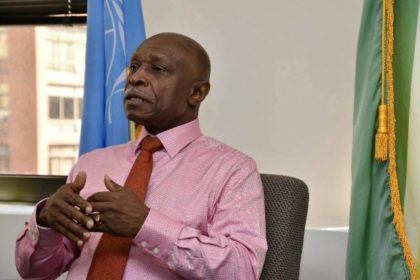 The Government of Guyana stands firmly on the position that a juridical course of action is the only means through which this matter can be permanently resolved. Before demitting Officer, former Secretary General Mr. Ban Ki-Moon gave a commitment that the Guyana-Venezuela border controversy will be referred to the International Court of Justice if an agreement is not reached by December 2017.

Earlier today, Venezuela indicated to the UN that they are interested in an amicable settlement with Guyana with regard to this matter and Minister Greenidge said that Guyana welcomes this stance.

“We are concerned that the state in which Guyana has found itself over the last 51 years starting from the time of Independence…this has really been unbearable in many ways. It contributed in large part, to the difficulties in which Guyana finds itself and the Agreement of 1966 was never intended to lead to a perpetuation or lead to Guyana being [in] suspended animation as regards to claims on territory that has always been part of Guyana,” the Minister said.