The Ministry of Social Protection’s Sustainable Livelihood Entrepreneurial Development (SLED) programme will soon be rolled out in Region Nine, (Upper Takatu Upper Essequibo) and will see the realisation of a variety of small businesses.

During a Ministerial outreach in the Region One Friday, February 15, 2019, Minister of Social Protection, Amna Ally told residents of St. Ignatius, Quarrie and surrounding communities, that in 2019, SLED will prioritise empowering the residents, of Region Nine, with small businesses such as sewing and garment and block making.

Minister Ally said her Ministry has already received proposals from various communities. She encouraged the residents to make use of the initiative so that they can earn money and improve their livelihoods.

“We believe you will have a better life if you can earn more. In this village there are a lot of projects that you can do to help better your community. We already aided the setting up of block making businesses in Moco Moco and Arnaputa so they can earn money for themselves. If you are empowered and making money you will have a better life,” Minister Ally explained.

Teenage pregnancy, domestic violence and school drop outs were among social issues raised by residents. Minister Ally assured them that those issues will be addressed in the shortest time possible. In the interim, she urged the residents to take on the role of counselling the children and young people in their communities. 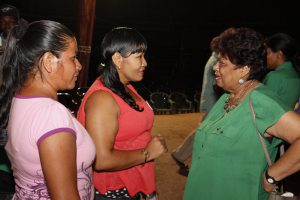 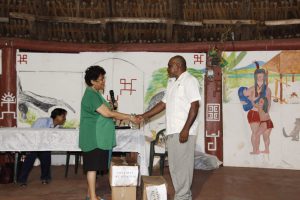 The Minister reminded that the government will continue to improve the quality of education, health, infrastructure and agriculture.

Just recently a 30 seat bus was handed over to the region to transport students from Lethem to St. Ignatius. Additionally, 50 young people received bicycles.  Minister Ally said this is proof of government’s commitment towards education.

“We believe in our young people and want to educate them. One of our goals is to advance our work in Education. We took away the $10,000 cash grants but we are giving bicycles, buses and the hot meal programme. This government needs to complete what we have started. We do not believe in holding on to power. We believe in providing services for all the people in Guyana, wherever you live so you can get the good life promised to you by the President.”

At the end of the meeting several items including garden tools, sports gear, footwear and a motorcycle were handed over to the community.