The Ministry of Social Cohesion will this year be expanding its stakeholder base and continuing sensitisation and training in all regions.

This is according to Project Co-ordinator of the Ministry of Social Cohesion, Sharon Patterson, who was speaking on a recently televised programme. 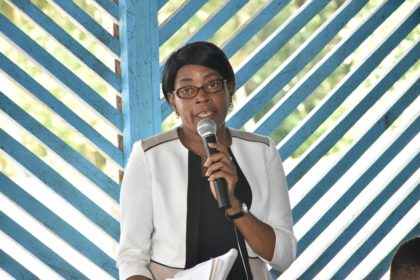 She highlighted that the Ministry, over the years, has interfaced with most of the religious groups, Community Policing Groups (CPGs), Neighbourhood Democratic Councils (NDCs), some of the Municipalities and youth groups, among other stakeholders.

An important aspect of this process is the training in Diversity Education and Inclusion which has been conducted throughout the country.

Training, she explained, is intended to help stakeholders understand who they are and where some of the prejudices individuals may have been rooted.

Patterson said that “we examine whether it is upbringing, where we get our value system from and then to go beyond that we look at what people can do to contribute to the social cohesion process in the communities”.

Following the two days of training, stakeholders are encouraged to work towards a small project to demonstrate their understanding of the tenets of cohesion and harmony.

The Project Co-ordinator said all programmes being undertaken by the ministry will continue to place emphasis on sensitisation as a critical aspect.

“Unless people are aware, unless they are informed and not just informed, but that they understand how they can contribute, we are not going to make a lot of progress.”

The ministry has been conducting a series of sensitisation campaigns in schools. A pilot project was conducted in Essequibo Islands-West Demerara (Region Three) in collaboration with the Ministry of Education (MoE), where students of the 14 schools in that region had an opportunity to display cultural wear and cuisine and other traditions related to the various ethnicities.

“What that did, was allow each group to have an appreciation of the other…also each school had the opportunity to demonstrate in some art form their understanding of cohesion and harmony,” Patterson pointed out.

One of the Social Cohesion Ministry’s flagship projects involved the bringing together of over 162 young people in the South Central Rupununi area and exposing them to information related to the social cohesion process.

Several of government and private sector agencies were part of the programme and offered information related to employment opportunities, Trafficking in Persons and more. This is another initiative that will continue this year.

Guyanese can also look forward to Harmony Village 2018 where various cultural and religious groups share a common space to showcase their talents.

Noteworthy, the Project Co-ordinator said contrary to a popular view, Social cohesion as a process is not new to Guyana.

Intervention by the United Nations Development Programme (UNDP) during the period 2001 to 2003 at the height of tension, to assist in bringing some measure of stability and help people to work together.

Those efforts, according to Patterson, were not sustained and the value flows were lost but with the Ministry of Social Cohesion coming into being in 2015, it demonstrated an effort and measure of will by the Government to ensure that whatever is done to unify the country is done on a sustained basis.

The vision of social cohesion is one of a unified Guyana where our diversities are embraced, our networks and collaboration with stakeholders are strengthened and equity promoted.

“Where decision-making processes result in equal opportunities and benefits to all. The vision is that one day there is going to be Guyana that is unified first of all, where our diversities are embraced, where all the conflicts are resolved,” Patterson pointed out.

Diversity is not only about race, but all the other variables such as age, gender, sexual orientation, religion, culture, and language, as well as ability.

The work of the Ministry looks at ways of bringing Guyanese together irrespective of those differences.

The mandate of the Ministry also coincides with Goals 10, 11 and 16 of the Sustainable Development Goals (SDGs).

The role of youth and sport in the social cohesion process was also highlighted by the Social Cohesion Project Coordinator.

It is anticipated that over the next few days leading up to the Mashramani celebrations the Guyanese tapestry will be on full display and Patterson expressed optimism that the togetherness that is exhibited during this time will be sustained.