The past year has been described as a challenging one by Minister of Foreign Affairs Carl Greenidge, due to the ministry’s preoccupation with relations with neighbouring Venezuela.

Giving a review of 2016, the Minister stated, “It has been a year in which we have been actively engaged in the efforts of the Secretary General of the United Nations (UN) in his very personal endeavours to find a way forward in our controversy with Venezuela.” 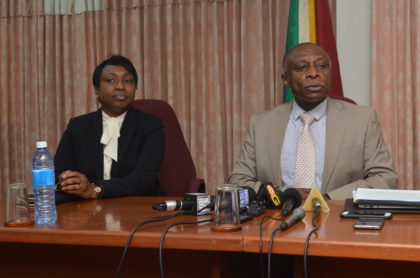 The UN has since taken a position that the Good Officer’s process will be extended by a year, and failing the conclusion of a satisfactory outcome, the process will be taken to the World Court for a final decision.

The Ministry began the process of structural realignment in 2016, to place particular emphasis on areas central to the promotion of its economic diplomacy programme, and on safeguarding Guyana’s national interest. This resulted in increased capacity and capability for staff, Minister Greenidge stated. The purpose of the realignment, he said, was not only to ensure value for money in the deployment of human resources, but to enhance the realisation of the Ministry’s strategic objectives.

“We reported last year on the efforts to recruit new Ambassadors steeped in relevant skills and having experience needed to prosecute our goals,” he stated.

The Foreign Minister highlighted that increased emphasis on economic diplomacy requires the acceleration of trade and investment activities. These also require that the Ministry fast-track training in various aspects of economic diplomacy. The Minister said, “That initiative was reflected in the diplomatic training programmes undertaken in 2016 for the preparation of persons for diplomatic postings overseas, and for the officers in the Ministry in general.”

Greenidge pointed out that the resuscitated Foreign Service Institute, “has been tasked with the responsibility of crafting programmes geared to meet the needs of the Ministry. In this regard, a number of training programmes in the area of foreign languages and trade were successfully launched.  They were supplemented by guest lectures from distinguished invitees on issues such as the legal aspects of negotiating international trade agreements, international border disputes, economic relations with the EU (European Union) and Brexit.”

With regards Foreign Policy, Minister Greenidge spoke of the 50th Independence Anniversary of Guyana and the 50th anniversary of the Geneva Agreement, explaining that particular emphasis was placed on, “promoting initiatives relating to the preservation of Guyana’s sovereignty and territorial integrity.”  To commemorate this event, the Ministry published a book written by Sir Shridath Ramphal entitled “Guyana in the World: The first of the First Fifty Years and the Predatory Challenge.”

A series of television programmes was also launched. Booklets, and other printed material were published, and lectures at home and in various venues abroad were held.

Minister Greenidge emphasised the moves to enhance Guyana’s image to improve the country’s standing in the international arena.  Part of this effort he said, resulted in appropriately trained ambassadors being appointed. He added, “That step is complemented by the appointment of skilled Consuls General (CG) such as the CG in NY (New York) who, comes not only with special academic credentials, but also considerable experience dealing with people across the world.” 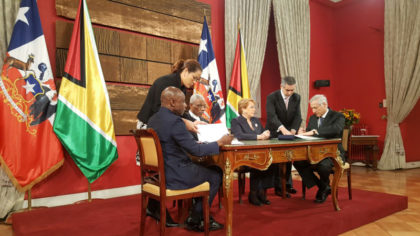 His Excellency, David Granger during an official State Visit to Chile held bilateral talks with his counterpart, Her Excellency, Michelle Bachelet. The Open Skies Air Services Agreement and the Reciprocal Visa Abolition Agreement were inked during the visit. The Agreements were signed by Ministers of Foreign Affairs of Guyana and Chile: Carl Greenidge and Heraldo Muñoz in Santiago on October 24, 2016.

Speaking of bilateral engagements, Minister Greenidge said, the national priorities of the Government, as well as of CARICOM, are also pursued through these. He opined that, during the past year, “relations with traditional friends and new partners were significantly enhanced through several high-level exchange visits and bilateral meetings convened in the margins of regional and international events.” He cited the State visit to Chile by President David Granger and the spin-off benefits of two agreements – a visa waiver agreement and a bilateral air services agreement, and commitments to initiate several joint developmental activities.

There was increased collaboration with the Russian Federation which also resulted in a reciprocal visa – free agreement.

The past year saw several Ambassadors accredited on a resident and non-resident basis. In addition, Government established two new Embassies abroad; in Trinidad and Tobago and Switzerland. According to Minister Greenidge, the former will boost relations with CARICOM and the Eastern Caribbean States, and the latter will serve to enhance bilateral matters with Switzerland, World Trade Organisation (WTO) issues and “a plethora of international and multilateral bodies based in Geneva.”

He explained that the Swiss Government is assisting Guyana with the Geneva office’s rental fees.

Guyana’s two most senior Ambassadors have been posted to China and Brazil. The Foreign Affairs Minister said that, “One of our most accomplished scientists and scholars has been posted to Delhi. With this improved representation in India, Brazil and China, it is expected that 2017 will witness more extensive cooperation and a higher level of cooperation implementation with respect to bilateral projects.”

The Ministry continued its goal of fostering greater regional integration. Guyana successfully co-hosted, along with the CARICOM Secretariat, the Thirty-Seventh Regular Meeting of the Conference of Heads of Government of the Caribbean Community (CARICOM) from July 4 to 6, 2016.   In January 2017, Guyana will assume the Chairmanship of the Conference. Guyana will also host from February 16 to 17, 2017 the Twenty Eighth Intercessional Meeting of CARICOM Heads of Government Conference.

In November, Minister Greenidge signed the tripartite agreement for the implementation of the CARICOM/ Cuba Project for the creation of a training centre to stimulate the development of children, adolescents and youths with special education needs associated with disabilities. This centre will be housed in Georgetown and should be completed before the first quarter of 2017.

In November, the CARICOM Single Market and Economy’s (CSME) Application Processing System (CAPS), a fully integrated web-based information management system, was launched. Applicants for the CARICOM Skill Certificate can now use the system to submit their application online from anywhere at their convenience. Guyana is the first country to utilise the system.

The Ministry of Foreign Affairs, with the CARICOM Single Market Unit, hosted a Private Sector and Rural Communities Workshop and Facilitation of Travel Sensitisation exercise in Guyana, during November. According to Minister Greenidge, the two activities formed part of the Ministry’s continued collaboration with the CARICOM Secretariat, “in sensitising and engaging various stakeholders at the national level to ensure they are aware of their rights, benefits and the opportunities available under the Revised Treaty of Chaguaramas.”

Guyana has also moved to re-engage actively with the Association of Caribbean States (ACS). The Ministry spearheaded efforts to ensure officials were able to benefit in 2016 from training offered under the aegis of the body in the areas of Disaster Risk Reduction, Trade Development, Transportation and Sustainable Development. In 2017, Guyana will seek to, Minister Greenidge said, propel projects that can garner resources for execution under the ACS Special Fund and advance candidates to serve on either the Special Committee for Disaster Risk Reduction or the Special Committee for Sustainable Tourism.

Guyana also followed the activities of the Union of South American Nations (UNASUR) and CELAC, and maintained active participation in the process, according to Minister Greenidge.

The Government has embarked on the path to a ‘Green Economy’, and the Foreign Affairs Ministry will continue to promote an agenda towards the achievement of such a goal. This will be done at the bilateral level, and through the various regional and international mechanisms, according to Minister Greenidge.

“The Amazon Cooperation Treaty Organisation (ACTO) as a sub-regional mechanism remains important and relevant in this regard.”

International partners such as Italy has committed to the “greening” of Bartica. This initiative launched by President Granger will see all Government buildings and facilities powered by renewable energy within the coming years, as an example of promoting Government’s green agenda. In 2017, the Ministry will seek to pursue the possibility of Guyana becoming a pilot country volunteer for a Review of Guyana’s implementation of the Sustainable Development Goals (SDGs).

In 2017, Guyana via the Foreign Affairs Ministry intends to target a selected group of states with the objective of deepening economic cooperation and trade. The Ministry, Minister Greenidge explained, intends to strengthen economic relations for the promotion of trade, investment and tourism potential and opportunities, “utilising existing arrangements such as the Partial Scope agreement with Brazil. Arising out of the recommendations of the Standing Committee on Foreign Affairs, we are pursuing the review of this agreement in a bid to broaden the range of products covered, especially those which Guyana can export to Brazil.”

This effort is to give effect to the strategic objective of strengthening Guyana’s political, economic and social relations with targeted countries, through the outcomes of structured bilateral mechanisms and high-level visits to reflect national priorities and the CARICOM Agenda.”

The new year will also see the Ministry participating in the UN system. Minister Greenidge explained that Guyana will actively be part of the UN’s specialised agencies, funds and programmes, promoting the pillars of multilateral activity, namely global security, sustainable development, human rights and international law.

The promotion of peaceful means of resolving conflicts will also be a main focus of Guyana. To this end, Minister Greenidge stated, “We are of the belief that the resolution of international conflicts should be peaceful, and in accordance with the centrality of the UN Charter and the principles of international law. The policy advanced by the Ministry therefore recognises that to achieve a better life for all, development and security are best addressed through adequate attention to all global threats facing humanity.”

The Guyanese Diaspora remains an important partner in national development programmes. The Ministry intends in 2017, to follow- up on the High Level Meeting on Migration held in September. The Ministry’s Permanent Mission will play an active role in the negotiations relating to the global code of conduct of refugee and migration to be crafted.

The Ministry will continue to promote the strengthening of South-South cooperation, and will seek to play an active role in the formulation of the agendas of the South as part of promoting the nation’s interest. Minister Greenidge emphasised the continued engagement with countries of the South through participation in the Non-Aligned Movement; Group of 77; the Africa-South America and the Arab-South America mechanisms. “We believe that this is essential for building important regional partnerships especially for the translation of international commitments to concrete actions.”