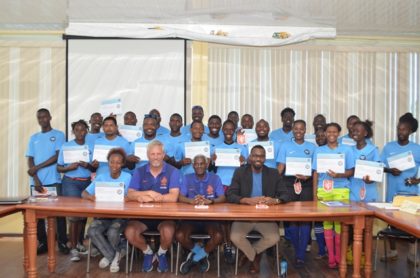 The Government of the Kingdom of The Netherlands through the WorldCoaches and International Social Programme of the KNVB; Suriname’s Vice Director at the Ministry of Sport and Youth Affairs, Kenneth Jaliens and the Netherlands Royal Dutch Football Association (KNVB) Instructor Andre Simmelink, spent the last week training football coaches from around the nation, helping them to develop their on and off field skills.

The collaborative effort dubbed ‘football coaching and life skills’ is between the Netherlands’ Government and the Guyana government through the Ministry of Foreign Affairs.

Director of Sport, Ministry of Education Department of Culture, Youth and Sport Christopher Jones said that facilitating such training programmes seek to train teachers with the relative skills, and knowledge so that they will be in a better position to take Guyana forward in the football world.

Jones noted that having trained coaches will ensure that youths learn a skill and have a sport discipline.

The same two coaches conducted a practical training workshop with 60 youths from the Tucville community. There was 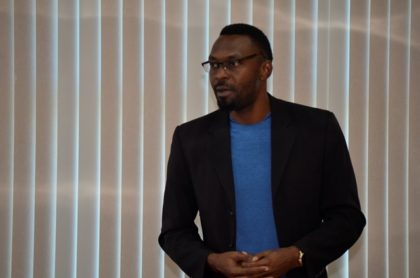 also a two-day workshop that catered to sports women, according to Jones.

Colin Nicholson, P.E teacher of the Mahadia Secondary school in Region Eight said he was most grateful for the opportunity to be part of such a training and looks forward to sharing his knowledge with his students.

Onefa George, P.E teacher of the Berbice High School commended the NSC for “not forgetting women and the role they play in the sport.”

Meanwhile, the Director of Sport explained that there are arrangements with the United States Embassy for a US envoy, consisting of two national basketball players in a few weeks, they will conduct a two-day programme in practical women in sport. This will be held at the Cliff Anderson Sports Hall and National Resource centre.

The training workshops are part of the Education Ministry’s aim of reintegrating sports into schools. It is also part of the effort to improve local athletes’ performance in international arenas.