Residents of 4th Avenue, Bartica, Region Seven over the past few weeks have been facing flooding. They have suffered losses of crops, and household items as a result.

Minister within the Ministry of Public Infrastructure, Annette Ferguson over the weekend did a walk about in the community, and met with the affected residents. 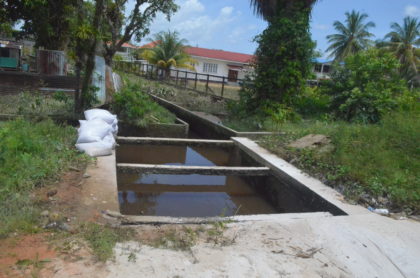 One resident, who goes by the name Melville, told the Government Information Agency (GINA), that the koker had been damaged for a number of years, and there has been no intervention to rectify it.

He said, “I suffering here for 4o years since Burnham, even the previous administration promised to fix this koker for us, but till now nothing has changed. In the colonial days, this place never use to flood, but now this is worst time of my life, so if ya’ll (you all) could do something about it, ah would feel so happy. Is koker door is the problem and they need a pump here.”

Trisha, another resident’s house has been severely flooded. She told GINA that previously when it rained during the high tide, the water never entered her house, but since the koker became damaged she has been suffering from flooding. “The whole house has flooded, I had to put my furniture high and I had to move my mother from the house because she can’t move around here in the water,” Trisha said.

Several other residents who voiced their concerns stated that the koker is indeed the problem and needs urgent attention.

Minister Ferguson in response to the residents’ concerns, highlighted that immediate intervention will be taken to bring an end to the prolonged issue.

She said, “What I will be doing from our end as Minister of Public Infrastructure is to have my sea and river officer, along with the Mayor visit the area and have an assessment done, a comprehensive report submitted, and if we have to treat the issue as an emergency, we will so do to have these works executed.” 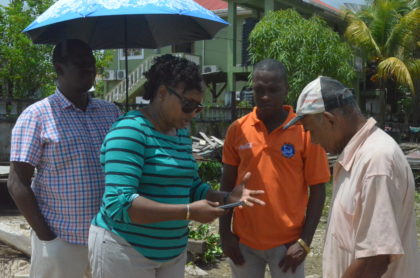 fixing the situation. “It is very disturbing to see that homes are still under water and people frustrated which they have a right to be because it is hard to live and carry out your daily routines with your home under water. But we as a caring government, will bring relief to these residents,” Minister Ferguson underlined.

Meanwhile, Mayor, Bartica, Gifford Marshall said the municipality has been working in the interim to provide immediate relief as they await government’s assistance.

“We did some emergency work on the koker doors, and there was some seepage under the wall, and we attempted to block those. We also spent some funds and got some drains desilted. Works will continue for the next three or four days to bring some relief to the residents,” Mayor Marshall explained. The other river defences were found to have breaches, too.

He added that there were some major problems with the sea and river defence which the municipality is also working to address.

The Mayor is urging the residents to adhere to proper disposal of garbage for the water to remove off the land.

Meanwhile the flooding in Regions Seven and Eight continues and government’s support and relief to the residents persists.

On a visit over the weekend to her hometown Kako, Region Seven, Minister in the Ministry of Communities Dawn Hastings-Williams delivered food and medical supplies to the affected residents.