– a rock armour to be constructed

– 2 diesel pumps positioned in Cottage and 1 in Dantzig

– Mahaica/Woodlands sluice to be fully operational during low tides

Government has taken an aggressive stance to ensure all is done to strengthen Mahaicony sea defences. This is being done in light of the upcoming spring tides and severe challenges within the zone already impacted by September’s tides that hit the area. 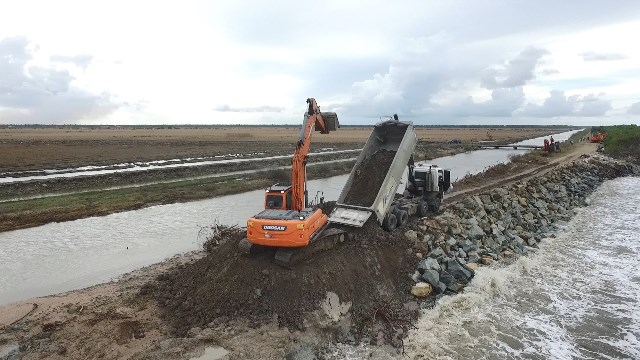 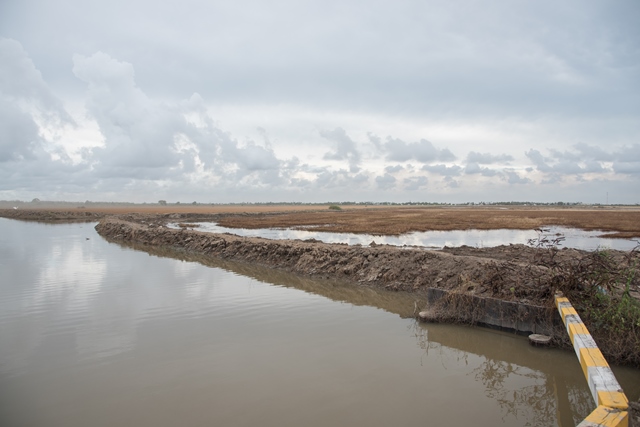 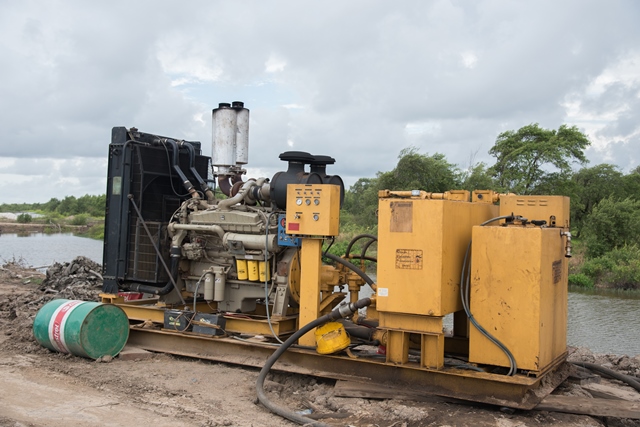 One of two diesel engines in place to power both pumps at Cottage, Mahaicony. 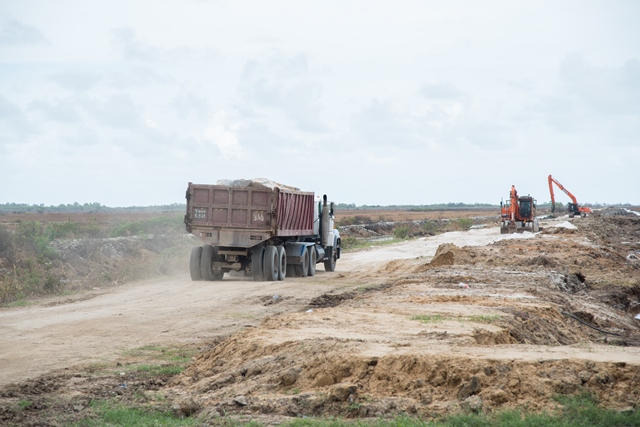 The zone in question spans 3km from Dantzig to Fairfield. As of Wednesday, 6,000 tonnes of rocks have been delivered to construct a rock armour within the area. In Fairfield, A&S General Contractors Incorporated has constructed 100 metres of rip rap structures with more works to be done.

Within the Dantzig section, BK International has responsibility for trucking material in via the road along the access dam to the foreshore. That access dam was widened and enhanced to allow the steady flow of the heavy-duty vehicles.

Both stone and dirt are on a continuous flow to Dantzig. Currently, excavators are mounting dirt along the earthen embankment to support the boulders stones that are set in placed along the shoreline.

In a collaborative effort, the National Drainage and Irrigation Authority (NDIA) has positioned 2 diesel pumps in Cottage and 1 in Dantzig. By the end of the week, another pump will be set up in Dantzig, bringing the total drainage capacity to 4 pumps.

NDIA and the Public Infrastructure Ministry have also impoldered many of the rice lands within the Dantzig to Fairfield area, in addition to the access dam leading into Dantzig foreshore to reduce the chances of heavy flooding in the residential areas.

This extensive operation in Mahaicony is not without challenges. Four barges sank since the last spring tide that ended October 2, due to the unrelenting waves of the Atlantic. Added to that, about two weeks ago, a tug had also sunk in the area.

Additionally, because of the damage done to the foreshore by the last spring tide, the transport of material to the breaches within the critical 3km zone has been a difficult task. It is with this in mind that the two contractors on the ground are working progressively towards the breaches from the Dantzig and Fairfield sites.

In addition to the contractors executing the emergency works, the Ministry of Public Infrastructure has also engaged multiple rock suppliers to support the work on the ground.

Both contractors in Mahaicony will continue works even as spring tides begin on Friday. Residents living along the coastal belt of Regions 2, 3, 4, 5, and 6 have been advised by the Civil Defence Commission (CDC) to take all necessary steps to minimise damage to property and to prevent health hazards.

The Department of Public Information (DPI) will provide regular updates on the expected spring tides during October 25 to October 30.