$66Million Maths and Science building for University of Guyana

Construction of a $66Million Mathematics and Science building will soon commence following an official sod-turning ceremony earlier this morning at the University of Guyana’s Turkeyen campus.

Present at the occasion were representatives from the Ministry of Education and the University.  UG’s Vice-Chancellor (VC), Professor Ivelaw Griffith said the two-storey building will be equipped to better serve the students pursuing courses in mathematics and science fields.

Minister of Education, Nicolette Henry [center] along with UG’s Vice-Chancellor, Professor Ivelaw Griffith and other senior officials at the sod-turning ceremony on the University of Guyana, Turkeyen campus

He also disclosed that in January 2019, the University will be launching its new Department of Petroleum and Geological Engineering providing students with the opportunity to earn an Associate’s and Master’s degree in petroleum.
“Engineering requires significant preparation in Maths, Physics and Chemistry so this is a critical part of the support to enable that to happen. The university along with government’s pursuit, has a significant interest in pushing what we do in earth and environmental sciences and biodiversity and this facility also will serve not only the natural sciences but also earth and environmental sciences with labs creating better scopes for students who want to study earth sciences and biodiverse issues to be doing that,” Professor Griffith stated.

Minister of Education, Nicolette Henry said the construction of such a building is crucial since it is aligned with Guyana’s focus on Science, Technology, Engineering and Mathematics (S.T.E.M).
“We are talking about a Science and Mathematics building which will support many of the faculties here on campus and so that is really important. We have to focus much more on the areas of science, technology, engineering and mathematics and if it is one building or infrastructure that could help to move that forward, it is this building” Minister Henry underscored. 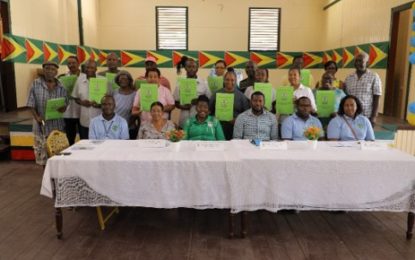