After years of being sidetracked and underdeveloped, the community of Mocha Arcadia on the East Bank of Demerara (EBD), is set to see some major developments as residents will soon become owners of some long-awaited land titles dating back some fifty years. 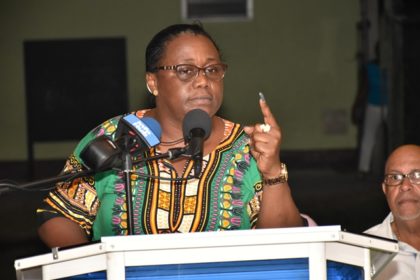 Minister within the Ministry of Natural Resources Simona Broomes.

During a community meeting with Minister of State Joseph Harmon on Sunday, Chief Executive Officer (CEO) of the Guyana Lands and Survey Commission Trevor Benn, said residents in the community have for years been receiving unfair deals in the allocation of land titles.

In fact, it was quite unfortunate that some 1,700 acres of lands located at the back of the village were owned by four persons who were not even living in the community.

“And so, the government felt that this was not the right approach and immediately took steps… the leaseholders were in breach of the leases anyway. The leases were then cancelled and the 1,700 acres became available to members of the community,” Benn told residents.

Since then some 320 lots for housing and agriculture purposes have been made available along with 58 larger plots strictly for agriculture purposes. According to Benn, the Lands Commission received substantiated claims from 123 residents and offered in December last year, provisional leases to those individuals.

He said the commission is currently carrying out surveys on the lots to make them permanently available to the community. It is hoped that within the next two months, the lands commission can commence issuing 50-year leases to residents.

Mocha has been known to be a farming community and according to Benn, the commission does not want to take that away from the residents. With that, persons who will receive house lots will be allotted one acre each, which will enable them to do some amount of farming.

He recalled in his meeting with the president prior to him taking up the post back in 2016, the president expressed the need for persons to be allowed land that would give them some opportunities to do some farming. However, for those who are seriously involved in Agriculture, there are varying amounts that will be distributed before the end of the year. 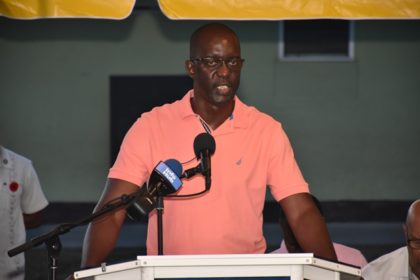 Speaking also at the community meeting was Minister within the Ministry of Natural Resources Simona Broomes. She noted that the time has come for the community of Mocha to be lifted to that place where it needs to be. She belted out praises to government’s continued commitment to communities like Mocha Arcadia and reminded that “government will continue to stand for the people of this country.”

“I came to Mocha for a funeral years gone by and it was sad. There were no lights, no roads and there was a presence of depression in this village. A spirit of neglect and oppression right here in this village,” she said

However, her visit on Sunday was a different story.

“Today, I came to Mocha and I feel the presence of victory.  I walked on paved roads. This government already did two and we are going to do all in Mocha.” She said no one will have to picket for a better life.

“You deserve like any other community in this country, a good road, electricity, water, and housing. You deserve that your land that was taken away from you, be given back to you. You deserve all of that,” Minister Broomes said.